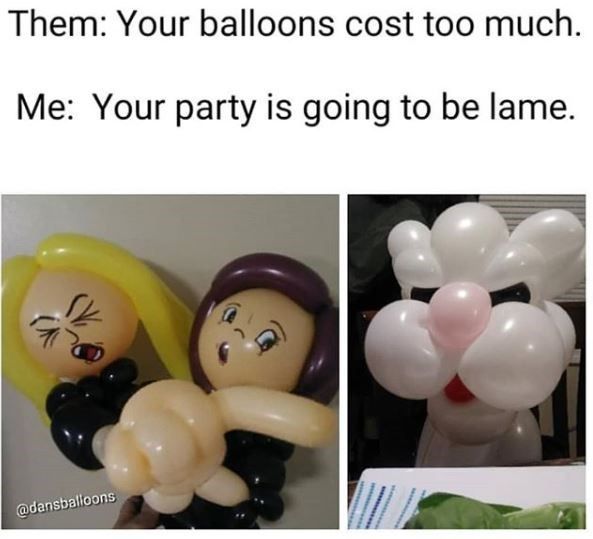 Quarantine, Day ?? -- All the days blend together; thank goodness for the internet, which allows us -- in the absence of a television by choice -- receive word of the outside world. Although given the countless conflicting accounts of events beyond our neighborhood, it’s not possible to know what’s really going on.

Our matzoh supply is critically low; we may be forced to eat leavened bread before this is all over.

Thanks for the fake hate map link; clearly, we must restart hate crime production in America as the demand for them has outstripped domestic supplies. 👿

Thanks yet again for hosting us all these years; hope all is well in Bountiful.

(Back in the pre-WWW days, I stumbled across alt.tasteless on usenet. There were several quite-bright and deeply-jaded regulars who posted some wonderfully hilarious, unsavory stuff. I saved many of the best posts I came across, but most of them have gotten lost over the course of “moving” to subsequent computers. However, I do still have one which TeX referenced yesterday; it is “cut-and-pasted” below.)

We could use a few more catfish stories here too. Brits are really missing out on these Glub blessed creatures. Not only are they foul, diseased, slimy bottom feeders, but they’re on the very *verge* of amphibian. They don’t just flop around mindlessly when you pull them out of the water… they try to get their bearings, gasping and crawling with their fins, looking right at you as if you say “Lemme get this breathing thing figured out, then I’ll TAKE your ass, air creature.”

Yes, catfish are the very paragon of aquatic tastelessness. Having lived in East Texas all my life, I have seen numerous disturbing incidents involving catfish. Let’s begin with a detailed description for those unintitiated in the ways of Redneck Sheepfuckerdom:

Catfish are a staple diet of the Redneck Sheepfucker clans of the American South. There are four primary species of catfish that inhabit the area. They are: The Blue, Mud, Channel and Flathead (or Oppelousa). The state record catfish caught in Texas was a 116 lb Blue catfish caught in 1985. No, that was not a typo. That fish was the size of a smallish adult human and could very well have (and probably did, at one point or another) eaten a human child if it felt so inclined. In addition to growing to ridiculously huge sizes, catfish have several physical modifications that make them rather nasty creatures to deal with:

Slime: Feels like a combination of piss and axle grease. Smells the same.

Skull: Heavily armored, harder than chinese arithmetic; greatly complicates efforts to kill the goddmaned things. Smaller specimens can be dispatched with bludgeons, larger specimens should be hauled onto the bank and engaged with anti-tank munitions until stunned, then set afire with several stakes driven through the heart.

Fins: Both of the pectoral and the dorsal fin have long, barbed spines covered in a toxic goo that causes swelling and the most excruciating pain this side of a “Three’s Company” rerun. Avoid at all costs; if stuck, shoot yourself.

Mouth: No large teeth as one would expect on a beast this foul, just millions upon millions of small rasps set in a wide mouth. DO NOT attempt to “lip” a catfish as you would another, less horrible species. It’s like getting your thumb caught in a sandpaper-lined vise, then having the concraption tightened by a ringtailed lemur on a crank binge.

About the only saving grace a catfish posseses is that it is delectable when fried. They are prehistoric beasties that, were it not for the fact that they taste so good, would have a kill-on-sight order issued upon them by various governmental agencies.

Actually, catfish aren’t the meanest things in the water around here. You have your Bowfin (aka Grinnel) which looks like a prehistoric lovechild of a largemouthed bass and a Ginsu factory. They have a long, ruddy green body and a wide mouth full of large, sharp, pointy teeth. They have no compunctions whatsoever about devouring anything that comes with in a nautical mile of them and will gladly maul your hand if you’re so foolish as to offer it to them. Also, they’re borderline amphibian and if kept moist, can live outside the water for a very long time. Many fishermen, stupid enough to toss one in the boat to asphixiate on the ride to shore, have been bitten after returning to the dock some hours later and “lipping” a “dead” Grinnel. If I’m not mistaken, the state record Grinnel weighed in at 18 pounds. Larger specimens have been reported, although nobody wanted to be around the godforsaken things long enough to weigh them.

Texas is also home to the Alligator Gar. Imagine a U-boat. Paint green, equip with thick, scaly armor, fierce, beady eyes, a tiny, pea-sized brain and a set of alligator jaws studded with teeth to match. There ya go. The state record for Alligator Gar is 308 pounds. Read: Fucking enormous water-breathing alligator. They’ll eat anything and like to lie close to the surface, apparently daring something to come around and start shit. An alarming number of accidents have begun to be reported as Jetskiers flash through the side channels of local lakes only to encounter lounging gar at 50mph. No attacks have been reported as of yet, but if one of these things did get irked enough to attack a human, I doubt that there would be much left to report upon.

Basically, don’t swim here and bring a gun when you go fishing.

Bwahaaaaa, that was worth getting out of bed to read, Fatwa! Thank you, Sir!!

Good morning, friends. It’s good to see all of you!

Good morning, Harper! I hope all is well in your household! How is your pastry blender?

Good morning, Paddy, dear. My household is well and my pastry blender is still an existential crisis.

I hope your family is well, too.

I’m off to find my bed for some recreational napping. I don’t have to sleep, I could force myself to stay awake but sleeping will feel so good.

Editor
dv8 - something whimsical but not grim
Reply to  Paddy O'Furnijur

The ancestral one our old roomie ruined is gone, I think. I’m not even sure if we have one now. Said roomie didn’t know what it was for, but decided it would be perfect for making his egg salad. You probably remember the whole story, I’m guessing.

I have a big kitchenaid mixer I use these days. In fact I just made up a big batch of pancake mix using it for that very purpose.

I blended up the Whey and wheat protein, mixed it with flour, about half and half like 3, 3, 6, cups. to make a total of 12, plus salt, baking powder, splenda, and oil. The end result is a bisquick like mixture but much higher in protein.

I don’t know what it is, but I read that story twice yesterday and giggled and just now, it still makes me laugh.

But that’s easily the scariest looking animal I’ve ever seen.

Flipping through the news to get pumped for another day at Casa Sven working remote for TEH BESTEST PLACE EVER, I came across a NY Times story about the terrible burdens being placed on young people due to the Chinese Flu fallout. Many anecdotes and pictures including one that has this caption: “Andrew Lawson, 29, has lost most of his income in the last few weeks. He and his pregnant wife, Juliana, have a 2-year-old son, Vesuvianite.”

If you named your son “Vesuvianite” then it’s not too surprising that some hardship is going to fall into your lives as cosmic payback.

Bad news on the home front -- the creature in the walls is back.

Once again, I could swear I refreshed the site before posting my first comment but didn’t see you; tarnation!!

Sorry you’ve still got a wall-critter; perhaps you should name him Vesuvianite. 😉

(Wonder if the last four letters of that name are pronounced “night” or “nee-tee”, like Riunite.)

…wonder what the story is on naming their kid that? Just hippie madness or something more?

Fatwa -- thanks for storey tiem!

Sven -- sorry about the return of your wall creature, Vesuvianite.

Fatwa: Great story. Evidently La_TeX remembers it from a post long ago. The usenet is cool, although I’ll admit I haven’t been on it in years. Do ISPs still host usenet servers? I don’t even know.

I’ve used IRC recently so that’s still around, in fact outfits like Twitch use IRC as their chat platform, so there’s a bit of a revival. Anyway, that probably means that the usenet is still around.

Other things, such as FSP or some other random experimental protocols might be gone. Does anyone use WAIS anymore? I don’t know.

I remember how much Harper loved story time, back in the early days of the wheel.

Strange update on my Commie-19 pal up here:

Good news for him, bad news for some others, I’m afraid.

So he was informed just a few days ago that his test got mixed up with someone else’s. So, as it turns out, he doesn’t have the virus at all. The doctor’s aid who called him didn’t have any more details than that, but evidently, whoever he got switched with went home and may have been infecting people for the last month.

We don’t know if he had any symptoms or, indeed any other details, but, well, at least our friend up here is okay.

Editor
Paddy O'Furnijur
Reply to  dv8 - something whimsical but not grim

Well doesn’t that just suck the life out of things. Good news for your friend -- bad news for those who have been in close contact with the infected individual.

Re the hate map:

if you scroll down all the way, there is an explanation of why the dude created the map which should resonate with a lot of sane people.

Fake Hate Map: When the Demand for Hate Crimes Outweighs the Supply…

The world is the safest its ever been.

Bullying and violence in schools is at its lowest levels.

I am grateful, as a Jewish guy in my 30’s who grew up in New Jersey, to have lived in the safest country and safest time in the history of the world for people like me.

The story tellers on T.V. might benefit from your freight [sic.] and despair. But it is not based in reality.

There are real crimes committed by people who are motivated by a sense of hate towards people from other communities. But they are few and far between, and they are resoundingly condemned by pretty much everyone that matters.

Don’t let the pessimists mislead you and ruin your outlook on life.