Teh Younger left this morning for a week-long trip to Yosemite and Sequoia with some of his friends. The weather should be perfect. Let’s hope the bears aren’t a problem.

Me too. Alternate caption: “I’m in yer showerz crawlin’ up yer waterspoutz.”

And speaking of captions, belated congrats to Jerry for sweeping the last three contests. 😉

I suspect that many folks in teh D.C. area are very short on sleep this morning. To quote Grumpy Cat, “GOOD!”

My Little Mouse and her family got back yesterday. I thought three cats were a handful but I now realize how quiet the house was. It was a relief to know they were back home safe and sound. It is a bit strange to walk around the house with all of my “house full of cats” reflexes still in operation but no cats to trip over or try to escape. It is also a bit strange to find the table decorations unmolested.

I need something like an Annoy-a-tron that makes cat trills.

Hope everyone had a good time.

Glad to hear that Elena got home safely and now, hopefully, those ‘cats’ will behave themselves.

Belated congrats to Jerry on his caption win streak.

Nice visit with Mrs Sven’s Danish friends. I was happy to see some of the folks she works with give her the props and friendship that she deserves. The Danes were friendly and engaging and I learned some interesting things about Denmark: all education is free including college-level and the govt will actually pay you to be a student; tax rates are high-45% income tax rate is typical-and sales tax is 25% across the board, plus I think they have addl taxes for ‘sin’ foods that are high in sugar and stuff; medical care is free as well and they are happy with the availability and quality; you can get a driver’s license at 18-it costs about $1000, is good for a lifetime, and takes about a year to complete the process as they test you in all types of weather conditions.

They mentioned a new term that I’ve immediately globbed on to: ‘curling kids’. If you are familiar with the game of curling, most likely from the Olympics, you see the one guy shoot the stone and then the sweepers follow the stone down the course removing any obstacles in its way to the target. Curling kids refers to young adults with parents that overly protect and coddle their kids well beyond age 18-something that they are seeing a lot of in Denmark apparently.

I’d say I’m a little conflicted about the recent NSA outings of data collection and abuses from this Snowden feller, although I lean towards it’s a good thing. Right now, anything that makes govt look bad or makes people suspicious of it is fine with me. I’m amused with pundits and govt folks saying he should have gone through the proper channels to voice his concerns-that worked out real well with F&F didnt it?

I’m confused by these press shield laws. Greenwald essentially received stolen property from a thief and passed it on at a profit. How does the fact that it was classified information as opposed to stolen jewelry or whatever not make him guilty as well for receiving stolen property?

Fatwa: “Those who continually blame the “moral decline” of this country on teh gheys, pornography, drugs, lack of prayer and/or other SoCon bugaboos need to get the farking plank out of their eyes ASAP.”

I don’t know about moral decline, but if I had to name the one thing, morally speaking, that has contributed most to what I consider an overall decline in America’s standing, I’d go with out-of-wedlock births/single parent homes. It’s a real issue and it is championed/discussed primarily by the right. If I had to look at one govt-related metric showing America’s decline, I’d point to the incarceration rate.

I agree that out-of-wedlock births/single parent homes have contributed mightily toward serious social problems in this country.

However, even when they’ve controlled the Congress, the GOP has done nothing significant to discourage said behavior. IMHO, this is because they’d rather be “liked” than principled.

And the Democrats have been promoting this trend for decades with the policies they espouse.

AFAIC, both major parties are responsible for the perverse incentives which have contributed to this dilemma. In large part by an effectively non-stop increase in the size and scope of entitlements.

Criminy…the older I get, the more resentful I become of having to pay for other Americans’ lack of personal responsibility.

I often feel like a huge chump of late.

In either case, those few represent maybe 10% of elected officials. Where do I get that number? Well, I pulled it out of thin air and maybe it’s on the high side.

The problem is government and not necessarily the two parties.

Well…we now know where some of the ammunition that’s not available on store shelves has gone: the Afghan National Army!

The U.S. government has given the embattled Afghan National Army (ANA) more than $1 billion in taxpayer-funded ammunition, according to the Special Inspector General for Afghanistan Reconstruction’s (SIGAR) latest oversight report.

I hope they sent them lead-free ammo as that other stuff is bad for the environment.

Sports smack talk with my ultraliberal cousin in Chicago:

Hey Sven, How about those Hawks? Pretty good, wouldn’t you say. Hope all is well, Love

Yeah, cousin, they beat the Kings up good altho I imagine you guys were a little worried the way Game 5 played out. Looking objectively to the Finals, I’ll pick Boston to win it all. Not a big fan of the Eastern Conference and don’t follow them nearly as much, but the way the Bruins took down the Penguins was pretty impressive.

I’ll send you $20 but in no way will I write a check to the NRA. YIKES. If I win you can send it to Planned Parenthood

Heh. You feel the same way about the NRA as I do about Planned Parenthood-never been a fan of eugenics. OK, $20 on the line to be sent to the winner. I got Boston and you got that team with that insensitive native American logo on their jerseys.

Ouch! That’s gonna leave a mark!
Well, that is if your ultra-liberal cousin has any sense of irony and/or shame.

What could possibly go wrong?

Mexico City residents have swapped personal firearms for consumer products in a program political and social leaders have termed a success, according to Mexican news reports.

In a wire dispatch from El Universal that appeared on the website of El Diario de Coahuila, the program called depistolizacion or depistolization has received almost 6,000 firearms and munitions including grenades.

According to data supplied by Secretaria de Seguridad Publica (SSP) Jesus Rodriguez Almeida, 5,641 firearms were turned in of which 3,987 were pistols, 356 were grenades, a bomb, one weapons magazine and 44,495 rounds of ammunition.

The program begun five months ago is set to end this summer.

The report quoted Rodriguez Almeida as saying the program was intended to disarm the civilian population in the city’s 16 municipalities.

The program had the help of the church and local Catholic parishes were used as collections centers for the firearms. Among the leaders who helped push the program included Distrito Federal president Miguel Angel Mancera, Cardinal Norberto Rivera and Nobel Peace Prize winner Rigoberta Menchu.

A second program will start soon, but its time was not specified in news accounts.

Fatwa -- I see that Apple has provided a sneak peak of the new Mac desktop (should be released “later this year”).

Read about that earlier today; I think I’m glad I’ve got the big aluminum case version I got last July; I like having the expansion inside the box.

I’ll be curious to see what sorts of Thunderbolt 2 peripherals third-party vendors offer for external HDD enclosures / RAIDs, various chassis to accommodate video / audio / other specialty cards for “content creators”, which fit into the newly-superceded “cheese grater” boxes. (I suspect a lot of them will not be pleased with the additional hardware they’ll have to buy…not to mention all of the Thunderbolt cables.)

I look forward to reading reviews and seeing the price points (and not worry about being an early adopter).

I’m sure the drug gangs support disarming more of the law abiding citizens (and who else would go for this). Sheep are so easy to rule. 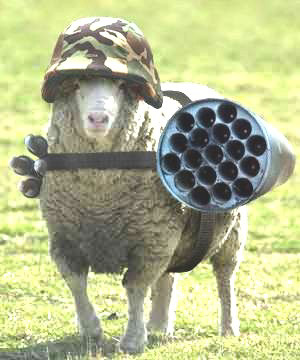 I think this was the image?

It was indeed, Mac…much obliged!

An evening musical interlude from a grossly underrated band:

And one of my favorite odd movies -- Club Paradise -- uses it.

Not a bad one, Kate!

And probably my favorite CJ tunes: