Happy Caturday, Gerbil Nation!
Good morning, Sven! You’re up early for a Saturday.
Mrs. Paddy and I will be joining some people from her church at a Habitat for Humanity build.

Sheesh, X, what a mixed bag. Glad for you that you got the headaches under control and sad to read that now there’s another problem to handle. Best of luck to you and Mr X.

Say hi to Jimmy for me, Paddy.

OK, I haven’t heard that one before, but it’s a good one.

Goooooood Saturday morning to all y’all from the breezy and fifty-some-odd degree Central SE Texas prairie. And welcome, Sinner! I hope we hear an update soon, and that you’re doing just fine.

Ugh, so much going on lately that it’s been all I can do to follow how everyone’s doing, and I’m with Sven, in apathy and getting around to mockery.

As for the goings-on:
I had the GOP fundraiser last weekend, and the VFD fundraiser is this weekend -- the former didn’t take much effort on my part (when they schedule meetings in the middle of the work day, sorry, can’t attend -- gotta work), the latter is taking a fair amount of effort. Which is OK but for…

Y’all know I’ve been dealing with headaches for the last couple of years. Well, the trigger point shots and some meds have managed to get those to aspirin-level instead of migraine-level.
Which is good.
About a month and a half ago, my upper back lit off -- and by that I mean it started to BURN. Like having a heating pad on it turned up to 10. Went through four different muscle relaxers, some more trigger point shots and a bottle of pain killers.
Nothing.
Saw the doc this past Tuesday, and lucky me, it’s most likely fibromyalgia. Follow-up in two weeks for further discussion.

And ‘den! Mr. X got in with the replacement ortho (apparently they fired the first one), and it’s looking like he’s got a rotator cuff tear. An MRI will show for sure, but for the moment, he’s going to go with shots to keep him “functional”.
Surgery would have him lifting nothing heavier than a coffee cup for the first six weeks -- and doing nothing.
Just that thought alone kills him, and makes me consider moving out for that time. He doesn’t do well with forced inactivity and would most likely drive me absolutely freakin’ crazy if he’s bored.

So we got that going for us.

And ‘den ‘den! Friends of ours from CA have closed on a house about a half-hour away. They’re leaving CA Sunday with a trailer of stuff, and staying here Tuesday night. Wednesday we’ll help them unload and we’ll have Mr. X’s work truck with all the tools.
Thankfully, I’ve got a massage scheduled that day at 5, so it won’t be too rough.

And…I think that’s it. Teh Mangler™ continues to be a challenge, as does work itself.
That could be another page and a half rant, but I’ll hold off.

I’m glad y’all are well and Cheers! to the FatwaK Clan for the civil disobedience during the shutdown.

Rabbit, your wood floor story is probably the main reason we rarely hire anything out. There are A LOT of contractors out here lacking in “round to its”.

Off to the fire house! 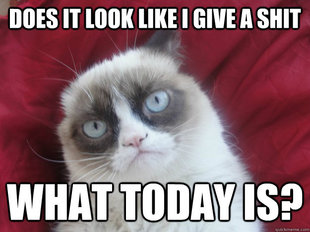 So sorry to hear about teh medical carp you two are dealing with. T’anks for the update; hope your friends have as uneventful a trailer-trip as possible. (Maybe they can run down teh Mangler as they’re on their way…)

Happy hammering. And if you happen to see Jimmuh…you know. 😉

Maaaaaan…POSOTUS-Care looks to be an even worse clusterfark than I’d feared. Not only the IT end -- which I’m beginning to think simply cannot be fixed -- but the fact that it seems docs and hospitals have no idea what their reimbursement rates will be.

I will not be surprised if another law gets passed making it illegal for docs to completely opt-out. Or retire. The gummint’s largely nationalized health care; the next step may be to declare medical providers as “essential resources” and nationalize them, too.

Update: My House rep, Rob Woodall (Crapweasel -- GA), has not responded to my email of nearly three weeks ago nor a phone call of 2 1/2 weeks ago. Ditto anyone in his office. As such, I will do my level best to call him out and humiliate him in front of other constituents at his next townhall meeting.

(Criminy…I was accorded more courtesy by Marcia Fudge’s -- and her hopefully-rotting-in-Hell predecessor Stephanie Tubbs Jones’ -- office when I lived in OH.)

“As such, I will do my level best to call him out and humiliate him in front of other constituents at his next townhall meeting.”

Looking forward to the youtube video of that one.

The healthcare web site debacle is just another example of failed IT projects. Likely a textbook example, but given the politics involved, no one will probably write it up. On the plus side, it will have only cost us around a billion dollars to make the thing work properly and then we’ll see the rainbows and prancing unicorns.

There were anywhere from 45 million to a gazillion uninsured in America when they rammed this thing down our throats; so what happens when 6 months down the road considerably less than that number enroll? The excuse will be what?

George Bush
Tea Party
Evil racist Republicans
The NRA
Talk radio
No excuse at all; it will be huge success no matter how many enroll.

If people don’t enroll, will the progs even wonder to ask why--will they consider that just maybe there was some flaw in their whole scheme?

Don’t forget Faux News will also share teh blame. And non-GOP folks “who want to see this president fail”…due to his complexion, of course.

Off to try and beat teh worst of the Saturday Walmart hordes (who largely should be beaten).

In a more perfect world, their stores would be festooned with signs reading:

The British multinational in charge of processing Obamacare paper applications received a hefty contract boost just days before Healthcare.gov’s disastrous roll-out, a sign that the Obama administration may have expected serious problems with the website.

The Business of Federal Technology (FCW) reports that on Sept. 26, the Centers for Medicare and Medicaid Services (CMS) increased their planned payout to Serco’s U.S. subsidiary by 75 percent, adding an extra $87 million to the $114 million promised for processing initial Obamacare enrollment applications.

Who are the cronies tied to Serco? I’m sure our diligent and dedicated betters in the media will get right on that.

The Daily Caller News Foundation previously reported that Serco, which stands to gain as much as $1.2 billion through a series of application-processing contracts with the Health and Human Services Department, is under investigation for serious fraud in its native United Kingdom.

Wow…we’re even outsourcing fraud and corruption now. I guess maybe America is in a serious decline.

Mrs. Paddy and I had a good time on the Habitat build. The site will eventually have 15 condos divided amongst three buildings, but they are constructing one building at a time, as funds come in. The amount of money they have had to spend to meet government regulations is astounding. The site is all of 0.75 acres and they have spent over $1 million to grade, install the road (with required rainwater containment/return to groundwater system), install the underground utilities, and pour the slabs for the three buildings. By 2016 half of all electrical power on new construction will have to come from on-site solar. By 2020 all new construction will have to generate 100% of their electrical requirements on-site. Never mind that these homes don’t have enough roof area to meet that requirement.

Sorry, but Wee Jimmy is getting too old to swing a hammer, so he didn’t help out today.

By 2020 all new construction will have to generate 100% of their electrical requirements on-site.

Hope battery technology improves a lot over the next seven years…not to mention solar tech.

Brenda just said, “I can imagine condo owners coming after one another with knives for using the dryers after dark.”

Brenda just said, “I can imagine condo owners coming after one another with knives for using the dryers after dark.”

Oh no, that won’t be a problem. The units will still be connected to the grid. Of course Southern California Edison wants to charge for transmitting solar power over the grid to make up for reduced sales, but that hasn’t happened, yet.

The units will still be connected to the grid.

Yeah, we both figured that; just being our usual sarcastic, gun clingin’, cracka’ selves.

One hopes that Mr. Obama makes liberal use of the White House swimming pool, IYKWIMAITTYD.

During the drought in the late 70s and early 80s they increased water rates because there was a shortage. When it rained again and there was water they raised the rates again because people were using less so they needed to charge more per unit. Government economics.