Reading the news stuff this morning, I’m glad to see that our long national nightmare is once again over and we can now begin that long-awaited conversation on homosexuals and ducks.

Glad teh party went well, Kate, despite the collapsing table. 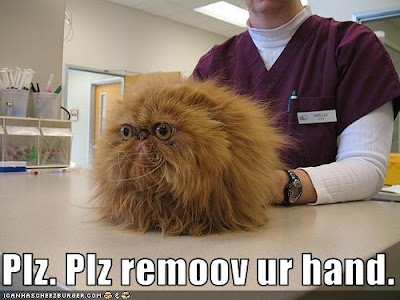 Very nice to see K8-E survived the collapsing table and dropped by.

Eye of the beholder and all that. I look at that cat’s expression, and to me he looks quite satisfied and happy.

Happy Caturday, Gerbil Nation!
Day three of float decorating is nigh! The float we’re working on (DigAlert) is not particularly interesting, but Mrs. Paddy gets to do some creative detail work, which she loves, so that’s good. Security is extra tight this year because PETA has announced plans to picket the Sea World float, which is about 60 feet away from us. If they actually tried to do anything to the float while it was in the building, they’d probably get beaten senseless by outraged volunteers upset that their labors were being destroyed. It would make for good news footage.

Hope you’re feeling better, Sven. I’d suggest one of K8’s cream puffs, but I’m guessing they were flattened in the Great Buffet Table Collapse of 2013.

Worse. We lost teh multi-layer nacho dip platter. OTOH we gained a dance floor.
It was indeed named The Great Buffet Table Collapse of 2013 which makes me wonder how we top it next year?

I feel better this morning, although I was up at about 3:00 this morning hacking my head off. Thanks for checking in on me, guys.

Mrs Sven’s Amazing Water Feature is acting up. It’s got an autofill attached to it and I knew that the float was stuck as it was running out of water. I filled the main basin up manually a few days ago so she could enjoy it for Christmas, but this morning the loud pump sucking sound woke me up at 6:00--out of water again. Dug up the autofill container and looked in it--yeah, the float was stuck in an off position--no surprise. So pulling out the rocks and upper grate from the main lower basin and it’s lost about 20 gallons of water in a few days. Not good. Filled it back up now and letting it sit for a few hours to see what happens to the water.

I could fix the float, but then the darn thing would just keep filling up and leaking out. I can’t imagine where the water is going tho. Hobos?

Now that Jerry’s balls are back, I thought this would be appropriate:

If they actually tried to do anything to the float while it was in the building, they’d probably get beaten senseless by outraged volunteers upset that their labors were being destroyed.

I’d actually enjoy seeing video of that but would feel bad for the volunteers whose work was vandalized.

I understand there will also be a float featuring a same sex marriage; criminy…must everything get so politicized? I’m personally fine with SSM but wish they’d give it a rest every once in a while in states which have legalized it. Yeah, I get they’re shoving it in the face of the entire country. But if we didn’t have overweening gummint everywhere which has no business “regulating” marriage, this would be a complete non-issue.

I like your float idea, but it would never work in California. Even if you could find people who possessed the requisite federal and state Class 3 licenses, state law severely restricts where you may possess any firearm. Open carry is verboten as is open carry of an unloaded weapon. Transport of an unloaded firearm in a vehicle (in a locked container, separated from the ammunition) is only allowable to and from specific locations, such as home and shooting range or licensed gunsmith. You know, we could solve the whole drive-by shooting problem if we just educated gangs about current firearms laws. The Left keeps telling us gun laws will protect us, so I’m sure it will work.

BTW, the gay couple will be getting married on the float -- sponsored by the Aids Healthcare Foundation (also being built near us).

Ooops…forgot they changed the law re open carry of unloaded weapons since I left CA.

In GA, it’s illegal to swear within teh presence of anyone younger than fourteen, so that banner probably wouldn’t be permissible here even with the asterisk.

But what if the guns were made out of flowers?

That probably violates numerous “zero tolerance” and “for the children” laws. (Which are starting to come under some fire in GA re schools; it’s about damned time.)