It’s Friday here in Happy Larryville…and -- presumably -- all across the vast GN.

Another charming yet wrong thread GIF, Mac; apparently, bacon’s not just for puppies any more.

Hope your events go as smoothly as possible today; sorry I won’t have time to squeeze in a nap on your behalf. 🙁

I’m giving a quiz to my students this morning, but first, I’m going to chew them out a bit for academic dishonesty. While entering homework grades yesterday, I noticed a student’s answers to some questions out of their workbook seemed at odds with their demonstrated ability (I grade homework based on attempting the problems, not accuracy, then go over questions in class). I checked online and found that the answers to all the workbook and textbook questions are readily available. A quick check of the last two assignments out of the workbook showed about 50% of the students copied the answers. These are my so-called “honors” students.

Not much honor among honors students, eh?

OK, this is one tale that I need to read the end of. Did the students own up?

The other day I was asked to make a slight tweak to a document that one of the managers at work wrote--not a big deal. But I start looking at the document and it is one of the most poorly formatted things I’ve ever seen. The header is atrocious and way too large, the chapter headings are a mess, orphan sentences and words galore, tables are split over two pages, references to tables, figures, and appendixes are incorrect, links don’t work, etc etc etc. Ignoring all that, I start to read the content and think, huh, OK, it makes sense--not badly written.

It took Google a few seconds searching on some randomly selected sentences to find the vendor manuals from which my document was created, pretty much word for word for at least 85% of the thing. Of course without any citations or attribution.

Plagiarism? Never heard of it.

Heh. Now there would be a dream job!

Did they own up to it? It wasn’t an option, neither was denial. I read one person’s answer after another, all exactly the same, then projected the relevant portion of the page from one of the websites that has the answer key while reading the same answer from even more students. I quietly expressed how disappointed I was with their behavior, how they had lost my trust, and that the AP in charge of discipline had been informed of the incident (I vented to her yesterday afternoon and let her know I would be ripping them a new one today, they’d get a zero on the assignment, and that would be the end of it. She didn’t push for anything more.) Apparently it was a topic for discussion, as a couple of other science teachers heard about it from their students and asked me about it.

I hope it causes at least some of your students to feel ashamed and embarrassed. Perhaps they’ll learn something from teh experience, too. 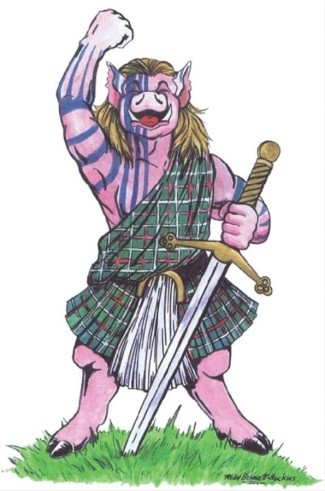 It’s Friday, and a payday, and I’m grateful for that. The Carnival of Whinging hasn’t abated, and in fact started early this morning, but there’s nothing I can do there.
Except b¡tch to my buddy Bob in another IM window and pray I don’t EVER cross the streams.

BUT.
After work, I was on my own again (Mr. X was working late), walking the dogs, whacking at the thistle in the pasture, and thinking to myself, “Maybe Dottie needs a girlfriend to hang out with…” and I thought about pulling up Petfinder just for a look.
When we all got into the eastern pasture with the cows and the pond, that thought vanished as I proceed to feed the school and the herd (the Baldy I don’t think knows how big she is -- she’s not timid, but she’s not overly friendly either -- she does get closer than Sid or Nancy used to).

Mr. X came home and we were chatting on the deck, the boys went off in the upper corner of the property, just as I saw a black flash go by the deck with Dottie in pursuit. Running around to the back of the shop, I found Dottie’d cornered a leetle lab/Dobie or Rottie mix. Probably about a year and a half old, with a collar AND a tag.
BUT².
We called the number and got the answering machine (this was at 5:30). We were asked to dinner by friends, so we had to leave, and didn’t want to just throw this pup to the elements, so we secured her on the screenporch and called again, leaving Mr. X’s cell number.
No calls during dinner.
I’m resigned to tracking the owners down by the rabies tag in the morning, which was going to be a LONG way away because this little dog DESTROYED quite a bit on the screenporch. Mr. X wondered if perhaps I’d read the wrong number off the tag, I hadn’t but just on a hunch, I ran a reverse directory.
It was the neighbor’s dog.
The one *I* call every time we have a random animal show up. For once, he actually OWNED this one!

::sigh::
Thank G-d. I realized I’m just not ready for a fourth yet.
I wrapped myself around the axle *just* a little bit with all the considerations. The dogs enjoyed Lilly Belle’s stay though (I just hope she doesn’t find her way back).

You know Paddy, I can’t even imagine trying to pull such a stunt when I was in school. Like you, the headmaster would have caught it and NO ONE ever wanted to piss that lady off.
Good on you for holding ’em accountable.

::snicker::
It might be fun for a day to work for Biden. “Hey Joe, did you know ‘gullible’ isn’t in the dictionary?”