Bummer about your Week of Mondays; hope this beach cake helps (and isn’t too gritty): 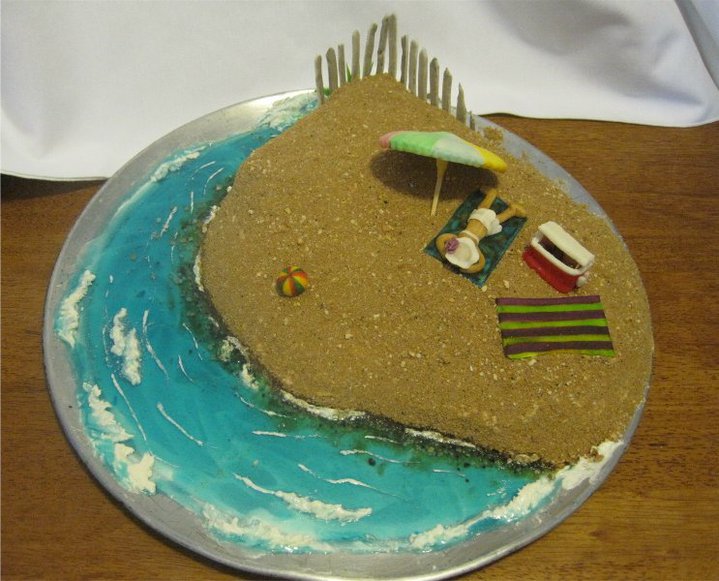 I may be wrong, but I think TeX’s birfday week commences on Friday. 😉

About the Bundy ranch and the BLM, nothing tells me I’m on the right side better than this:

Beck said on his television program Monday that, according to PsyID, a company that monitors social media, between 10 and 15 percent of those who are taking a stand for Nevada rancher Cliven Bundy are “truly frightening” and “don’t care what the facts are; they just want a fight.” Beck likened them to “the right’s version of Occupy Wall Street.”

I appreciate the fact that he actually woke up a few people, but he’s gone off the rails, and has started drinking his own Kool-Aid.

Happy Birfday, V of Five, Brenda and Howdy! all y’all!
Only have to get through this week, and then I’m on vacation. Good L0rd, I need it.

Dang it, I hate when that happens!

I’ve been following the BLM/Bundy standoff in Nevada only a little bit. Got mixed feelings as to the legitimacy of Bundy’s claims, but it was heartening to watch armed American citizens face down armed federal agents. The most disgusting thing tho that I heard from the Bundy side was one guy saying how they put the women front so that if shots were fired, the whole world could see federal troops shooting women.

Presuming the “women in front” bit is true, I certainly have strong mixed feelings about that.

But since the feds have, in reality, murdered women and children at both Ruby Ridge and Waco, I understand the tactic even as I personally disapprove of it.

“We were actually strategizing to put all the women up at the front,” he said. “If they are going to start shooting, it’s going to be women that are going to be televised all across the world getting shot by these rogue federal officers.”

No mention of what the women thought about that.

Teh Older and I stayed up to watch the lunar eclipse last night. It was quite impressive to see the shadow move across the moon, followed by the sunset-red coloration.

It was overcast here, so no live eclipse viewing for us. 🙁

Beck likened them to “the right’s version of Occupy Wall Street.”

I seem to recall a lot of violence, crime, vandalism, rape, drugs, and pooping on police cars at OWS events. Funny I didn’t hear of even one such case at the ranch, other than someone assaulting a dogs teeth with their arm or some such. You would think such violence would have gotten more coverage.

But then that seems to be common in comparisons of right groups to left groups, doesn’t it? Remember pictures of the aftermath of conservative and liberal events at the DC Mall? I wonder what the land looks like where these dangerous troublemakers gathered?

Thanks for the beach cake, Fatwa! We used to have so much fun making them when the kids were little. They would “paint” bathing suits on teddy bear graham crackers with those gel icing tubes. We used Fruit Roll Ups to make beach towels. Always had a shark fin sticking out of the water. Hershey bar piers. Gummy Lifesaver lifesavers.

The Monday part of today worked out -- the one floor staff person scheduled for today’s lunch did not show up so I got to do her job, the cook’s job and mine but the deliveries were on time so I made it to my massage appointment. If I live through the combination of Saturday night’s delivery and event and Sunday’s Brunch, I will be worrying only about sunburn by noon Monday.