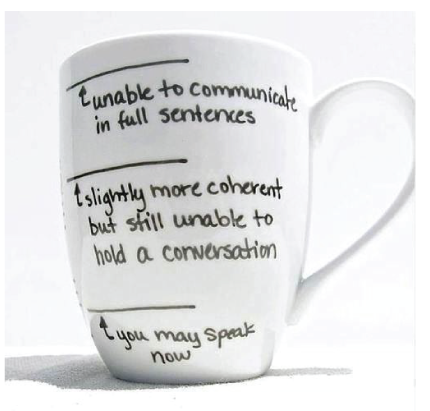 Good morning, Gerbil Nation!
Good morning, Fatwa!
It’s Monday morning, the washing machine is leaking, and I’m only now starting on the coffee. Fortunately the leak is only a corroded hose clamp that needs to be replaced. The hard part will be cutting the old one off.

I thought about that, but I’m out of cutting disks. It turns out that a pair of needle-nose pliers and a few back and forth twists sundered the metal band in twain. With the new worm-drive clamp installed, all I need is a test run to make sure the leaking has stopped. Hmm, I wonder where I could find some clothes that need to be washed?

With the kids in the house I am sure that will be hard. They jump all over themselves to do laundry as fast as it can accumulate, right?

Needle-nose pliers, is there ANYTHING they can’t do? 😉

I’m with Fatwa, I wasn’t quite ready for Monday morning. And reading through the threads kind of made me want to go back to bed:

The River County Sheriff’s Department showed up last night and brought huge watch tower that shoots up into the air 35 feet.

Fvck me, what the hell’s going on over there?!
We suspect our newly-arrived friends will put their Murrieta place on the market soon to support their spending habits. I think this may be a case of “bad publicity isn’t good publicity”.
Yikes.

All’s well on the homestead -- except we were the victims of a Skwirrel Military raid. When we left for College Station on Friday, one peach tree had some ripe peaches. In between the time we came home (~noon) and after dinner (~7), the peaches VANISHED. One left behind on a trail on the other side of the electrical fence had the teeth marks that pointed to the culprit. And the dogs were OUT between 3pm and 7.
Sneaky B@stards.

So no Scooby Snacks in the yard, but, they’ve developed a taste for fish, as you can see here:

Sometimes it gets a little difficult to filet properly using a Swiss Army knife -- but it works. I brought out a cheap-sh¡t cleaver but it was too dull.

Meanwhile I’m working on my mandatory “development plan” which HR comes up with every year. What a PITA. AND I have to go over it with Teh Mangler™. Why isn’t it an option to just do my fvcking job?

HR also had a “brand survey” last week -- my parting comment was, “I think any inclination to think the [redacted] “brand” reaches outside its four walls is wishcasting.”
Eh, it’ll come to nothing. As usual.

The usual pet peeves for a Monday morning. Coffee anyone: I thought perhaps I should provide a little context:

Nice to see you, Tex.

Sorry about the peach raid. Punitive measures are called for!

I swear Mac, we see so very few in the woods and they are a CAST IRON bitch to take out with a .22 loaded with snake shot (although *sometimes* the magnum rounds work).

I understand why you’re using snake shot instead of hollow-points, but have you thought about an air rifle in .22 caliber?

Fvck me, what the hell’s going on over there?!

Just our lawless President and his malicious minions sowing more chaos and turbulence. It’s almost as though they’re deliberately trying to provoke a violent response. And frankly, I’m about this farking far from hoping they get their wish. Congress has had ample opportunities to use their Constitutional powers to bitch-slap Il Douchey and shown their craven cowardice repeatedly.

“When wrongs are pressed because it is believed they will be borne, resistance becomes morality.” -- Thomas Jefferson

:: hangs head ::
Sorry, my filters are on a little hiatus. Hence the frequent cussing.
Or it could be Tourette’s, so I got that going for me… 😉