Only a bit after 09.00 and it’s already above freezing here in quasi-Arctic Larryville, GN!

Or is a feline Fifth Columnist. 😉

Get with the program, Comrade. Do you question our new feline overlords, Comrade? Are you an anti-revolutionary?

“You go wherever in the world the terrorists are and you kill them, you do your best to exterminate them, and then you leave, and you leave behind smoking ruins and crying widows.”

I guess I fall into the “hard-hearted” category, because I really don’t see a problem with that. I must be old school.

I’m watching the happenings in France with a very small amount of hope and a lot of cynicism. I hope the response is more than the usual shrug. It’s time to pick a side.

Yeesh, what a week.
The annual review process, which we’d been told had been sacked, really hadn’t and I had to do a point by point defense of my year (I still suspect the end result will be teh suckage).
Then! On my way to a Candidate’s Forum for our district’s seat in the State House I discovered mice had eaten my car.
And ‘den! After the forum, I went to pick up a scrip at Wal-Mart and got handed a $600 bill.
That was Monday.

I started working with one of the HR drones to figure out WTH is going on … and she’s about as bright as your average salt shaker.

I started going through all our records and none of it makes sense, especially since I went to pick up another scrip the other day and was charged $0.00.
W.T.F?
I’ll have to figure it out when I get back from Detroit.

Yes, I get to go to North American International Auto Show with my boss-boss again, and it’s going to be fvcking COLD again. I *think* I’ve got adequate plans for my extremities since it’s going to be in the teens.

Other than that, all’s well here on the damp and chilly Central NE prairie (well, the tomatoes finally took a hit -- there’s still some fruit on the plants … we’ll see).

The Fire Dept. had its Awards Dinner Friday, and Mr. X was awarded Firefighter of the Year. It was a REALLY nice change from last year when he was sworn in as President wearing a sling from his surgery, and PJs.

My thoughts are with Teh Younger. Ooof.

Time to get back to making sure I’ve got everything I need for my trip. I’ve got lists in my head and on paper -- I hope it’s enough.
::chews fingernails::

In no particular order:

1) Congrats to Mr. X.
2) Sorry your employer remains teh suck.
3) Safe journeys…and remember that the exhibit halls will either be too cold or -- more likely -- too warm.
4) It would be nice to “see” you more frequently.
5) Your car anecdote reminded me of these critters from “Rocky & Bullwinkle”: 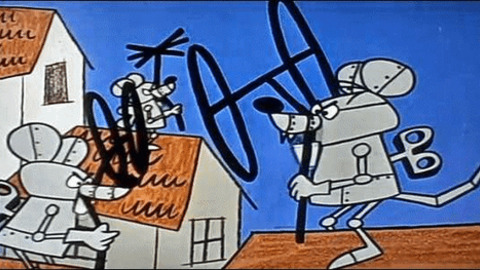 WTF is it with fookin’ Mohammedans and Joos??

In footage reportedly posted by Islamic State supporters today, a caption describes Coulibaly as Abou Bassir AbdAllah al-Ifriqi, soldier of the Caliphate, the perpetrator of Thursday’s attack in which he shot and killed a female police officer and of the Port de Vincennes Kosher deli attack, where he ‘took 17 hostages and ‘executed five Jews.’

He also claims to have put a bomb on a car which blew up in a Parisian street. This could refer to an incident that occurred in the Ville Juif (Jewish town) suburb in Paris when a car was blown up on Wednesday night.

I’m sure it has nothing to do with all the special shout-outs in their unholy book:

Abu Huraira reported Allah’s Messenger (may peace be upon him) as saying: The last hour would not come unless the Muslims will fight against the Jews and the Muslims would kill them until the Jews would hide themselves behind a stone or a tree and a stone or a tree would say: Muslim, or the servant of Allah, there is a Jew behind me; come and kill him; but the tree Gharqad would not say, for it is the tree of the Jews.

If I could afford one, I’d rather be hiding behind an Uzi (or Mac 11). And a flame thrower, too.

I’d love to see #jesuisjuif trending as much as #jesuischarlie.

TeX! It’s wonderful to see you! Congrats to Mr. TeX! Bad mice! I pictured you walking out to find a pile of debris where your car used to be. Reviews are just a way for the company to justify giving you no raise, a little raise, or firing you -- any resemblance between the review and your performance is strictly coincidental.

I wonder if the IDF’s ever thought of putting Arabic-speaking soldiers with Uzis in treelike Gillie suits saying, “Yoo hoo, O Muslim…there’s a Jooo hiding behind me!”

Followed by murdering the carp out of them.

Also, big honking bombs disguised to look like rocks with an audio chip, a speaker and lots of pork shrapnel luring “soldiers of Allah” to their doom.

Mice ate your car? I guess it’s true that everything is bigger in Texas.

Watching the festivities in Paris. Noticeably missing from the front line of leaders is our very own Barack Hussein Obama. I’m sure he wanted to be there, but had an early tee time.

Watching the journalistic pundits display nice examples of irony. In one breath they support editors across the country who won’t run “anti” muslim cartoons cuz they have correspondents in muslim countries and they are looking out for their welfare and safety; in the same breath they chastise muslim leaders and mosques for not speaking out and condemning this latest muslim atrocity.

Rain out here again; I can see Fatwa dancing a jig.

…I can see Fatwa dancing a jig.

No wonder I feel self-conscious. 😉

Perhaps I ought to be doing a horah instead.

Does it take a minyan of trollops to dance a horah?

I should look up “horah” to see what it means, cuz the first thing I thought of when reading that you were doing one was to think “I bet Brenda is pretty upset about that.”

I feel the same way about teh horah as I do all folk dancing. To quote British composer Sir Arnold Bax:

“You should make a point of trying every experience once, excepting incest and folk dancing.”

I posted my opinion of the the General’s comments late yesterday. Thanks for posting them there, Sven. Sorry I did not catch them earlier.

Nice to see you, Tex. Hope your back is doing better. Be careful on your trip. I hope you have some fun.

35 here and had some rain yesterday. Should be highs in the low 40s and cloudy the rest of the week. Lows around freezing. My kind of weather.

I posted my opinion of the the General’s comments late yesterday.

I appreciated your “short version”.

I would kind of like to see our combat troops play that very loud as vehicles or choppers sweep into an area like in Apocalypse Now. Let our enemies feel the same response the Germans learned to have on hearing bagpipes.

I remember seeing video of Vietnamese prisoners talking to American soldiers. The GIs were a bit surprised as the Vietnamese suddenly dropped to the ground in terror as some jets flew overhead. It was obvious which end of the airstrikes each was used to being on.

That is just how I want our enemies to feel about Americans coming. I keep remembering the Iranians releasing our people the day Reagan took office (or the day before?). I can’t imagine today’s Iran fearing our current President like that.

Ref. your first comment, remember the cats don’t like that. They are just doing it for you…and the children.

Are you an anti-revolutionary?

I would kind of like to see our combat troops play that very loud as vehicles or choppers sweep into an area like in Apocalypse Now.

And maybe some infrasonics mixed in for pantaloon-soiling -- and lowbrow comedic -- purposes.