I don’t know what to make of Palin endorsing Trump, except that it’s another sign of how broken and outright demented our political system has become.

That’s a might big sporran yer wearin’, Scotty. Overcompensating for a wee dirk?

So, our dear leader sold a 50caliber rifle to El Chapo without a background check during fast and furious.
We really need to close those drug cartel loopholes!

One of the things they have found frustrating as they try to ban those .50 caliber rifles has been that I don’t think there has been a single crime committed with them in several decades of use. I guess they figured giving them to criminals might help.

I guess they figured giving them to criminals might help.

Too bad the government got caught out…but nothing happened to the government employees who were behind it. (Which you’d expect, given that the FedGov is demonstrably a ginormous criminal enterprise run by the Democrat and Republican parties “families”.)

I recall reading that the LAPD has a rather large warehouse where guns confiscated as evidence in crimes over the years are stored. When they wanted to make an exhibit to show the dangerous AK47 assault rifles the police were so afraid of they had to lie and borrow one from a civic minded private collector because they had none of these guns in storage. Funny, given the claims every gangbanger and middle school student had one. The collector was less than pleased when he found out they were using his gun to try to make his collection illegal.

Silly Fatwad, laws are for the peasants, not the beautiful people.

OTOH, given LAPD’s tendencies, it’s also possible the reason they didn’t have any AKs in their inventory is that they were, um, “liberated” by some of those heroes in blue. (IIRC correctly, a few years back LAPD discovered that they were missing several automatic weapons from a SWAT storage facility. Which was poorly secured; go figure.)

Silly Fatwad, laws are for the peasants, not the beautiful people.

Or yoonyunized, badged, sworn goons of various sorts or other well-connected folks -most of whom are not “beautiful people”.

An officer discovered the weapons missing from a locked box on the first floor of the downtown L.A. facility on Thursday morning, the Los Angeles Times reported.

The thieves cut through locks on three doors and smashed through a metal roll gate to get to the weapons, which were modified to fire only blanks and set to be used in SWAT team training exercises, the newspaper said.

The building, which was set up with a series of rooms indented to provide realistic high-risk and hostage situations, did not have an alarm system or surveillance cameras.

Our wise rulers don’t need laws as everything they do is for our good and they are smarter and more virtuous than us. Just ask any Democrat.

Actually, many undercover officers use guns that were impounded as their issue or approved weapons would tends to shout “COP” so they use uncoplike guns.

Of course many nice guns that are “being held” while cases are considered disappear into policeman’s private collections. Sucks when a shooting is ruled clean but your $3,000.00 custom 1911 can’t be found.

There are also those judges with middle ages ideas who rule a gun that has killed someone must be destroyed. A judge ruled that way about a man’s $1,000.00 plus Browning HP even though the shooting was ruled justifiable self defense and no charges were brought. It did not matter that the gun had saved lives and the owner had broken no laws, the gun had to be melted down because it had taken a life. I understand they used to put objects like a tree branch on trial if they were part of a death such as a man running into it and falling from his horse. Liberals would laugh at that with contempt as superstition but are not embarrassed to do the same with guns. 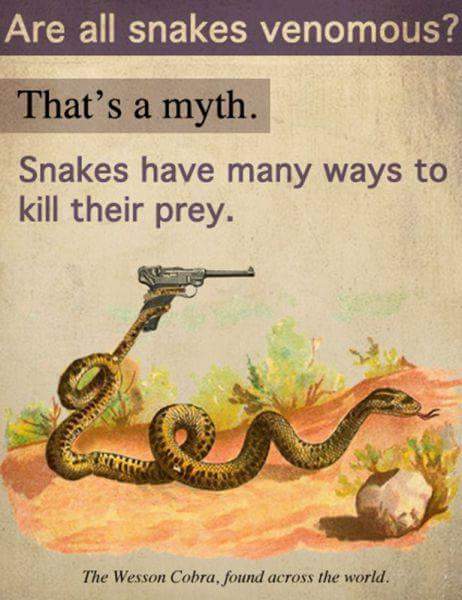 Of course many nice guns that are “being held” while cases are considered disappear into policeman’s private collections.

Just one of the numerous reasons I’ve come to feel the way I do about the King’s Men.

I understand they used to put objects like a tree branch on trial if they were part of a death such as a man running into it and falling from his horse.

That’s not very different than the current government practice of charging inanimate objects -- such as cars, cash, boats, etc -- with crimes and then keeping them without a whiff of due process.

Cali, do they get their ammo at Sonic?

I never thought I’d say this, but Sarah Palin needs to go home and just shut up for a while.