The raccoon in teh thread pic looks so forlorn; poor t’ing.

Man, who is doing all the kiltin’?

Of late, it seems that I’m a mass thread kilter. *Sniff* 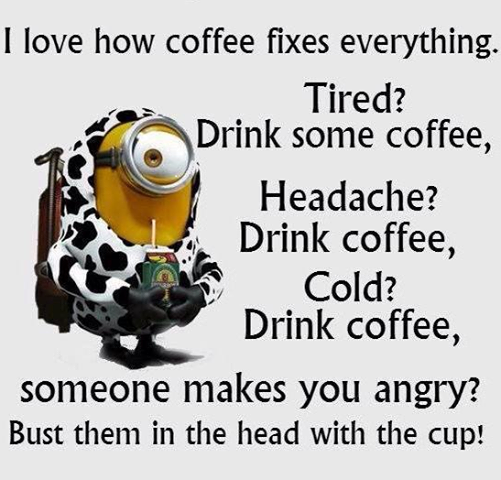 The city has recorded at least 95 homicides since the first of the year, compared to 47 last year, according to data kept by the Tribune. The city has also more than doubled the amount of people shot -- about 420 this year compared to 193 last year.

I blame Indiana. And Bush.

Mornin’ greetin’s , all!
BRR! All our sunny & 70’s went away & we are cloudy, windy & cold! Rain yesterday & through the night, but no Big ol’ storms like the ones east of here will get today.

BW spent some time on the phone yesterday shutting off utilities at TMP.

Of course, The FTW water dept. is living up to their jerkiness and requiring us to find their office & visit them in person. See, TM never changed the account over to her name after BW’s dad died, about 25-30 years ago. So we have to take both death certificates & BW’s ID (and proof she is the executor) to them. Can we fax it? No. This is the same water dept. that jacked us around when their water pressure surged (that they caused & denied) and blew the water heater up, causing a massive leak. There is still a huge credit on the account that they have refused so far to refund. They will have to now that we are closing the account. But I’m sure it will take a long time to get.
Then we have to go to the post office branch that serves TM’s house to change over the last remaining mail. BW had been reluctant to do it. I would have done it months ago, but she just couldn’t.
Anyway, that is what we will be up to today. I may try to get her to early vote. If she doesn’t, she probably won’t.

Har! Yup…all o’ them anthropomorphic guns sneaking out of safes and sock drawers, scurrying across the border and firing themselves indiscriminately. WE MUST DO SOMETHING ABOUT THIS HORRIBLE SCOURGE!!!

The FTW water dept. is living up to their jerkiness and requiring us to find their office & visit them in person.

Jeebus. After you get that credit refunded, you oughta hire a couple of them ambulatory Indiana guns, IYKWIMAITTYD. 🙂

Update:
We went downtown & found the water dept. At the window, I explained what we wanted to do. The lady looked it up & said the new owner had already put the bill in her name. This was not what we were told yesterday. So then I told her that we had a credit & we need the check in BW’s name & address. I gave her the death certificates & BW’s ID. She said she couldn’t change the bill to TM or BW’s name and needed to go talk to her supervisor. She came back & said that yes, the check could only be issued in his name & that maybe we could take it to the bank & talk them into cashing it. By now, BW is having an anxiety attack off to the side. I told the clerk that would be fine & gave her our address to mail it. I told BW not to worry, we would just deposit it in the joint account like I have done other checks of TM’s, without a signature, just writing “for deposit only” on the signature line (in the ATM machine).

Then to the post office in TM’s neighborhood. I was told by my P.O. that I needed a death certificate, BW’s ID & proof that BW was the executor to make this change and that I couldn’t do it locally. So we get there & fill out the change of address & I start getting all the paperwork out for the clerk. She goes through it, including the will. She said that she sees that BW is named as the executor, but she needs a power of attorney letter. What? BW then remembers that she had that form in her car, but we were in my truck. Fortunately, I have been carrying around a copy of the will and the medical/legal power of attorney papers in my truck since last spring. So I went out to get them and we were able to get the mail changed.

I hope this doesn’t sound like I am whining. I’m just putting it out there so you will know the incredible backwards BS we have to deal with in our New America Century.

But, on the bright side, I saw a inside beautiful art deco building. The water dept. was inside and had a black granite façade that said “Gas Power” from when I guess it was the gas company. Marble, granite, tiles ,lovely wood carvings, light fixtures, high ceilings, etc. It was almost worth the hassle.

Ha! I forgot to mention that it was pouring rain & we had to pay to park in a lot & use a credit card machine that was impossible to figure out on the first 2 or three attempts!

I loathe bureaucracies with the heat of a thousand suns; doubly so when it’s teh gummint.

Before the last time Mom visited us, she needed to renew her OH ID card. After repeated trips to the DMV -- due to being given incorrect information several times -- she was finally told by some mouth-breather that there was a problem because the name on her birth certificate didn’t match her married name.

She was finally able to find someone with an IQ above ambient temperature who got her squared away.

Drive-by cuz I forgot to say so earlier, but I love love love today’s thread pic!