Between the results of yesterday’s primaries and the current atmosphere in Cleveland, I reckon the GOP convention’s going to be quite colorful.

Cats. You gotta love ’em cuz otherwise they will kill you in your sleep.

"His were the eyes of a man who has gazed into the abyss, & the abyss gazed back, and then he endorsed the abyss." https://t.co/02r7mQu1mi

Trump: “Now go home and get your fuckin’ shinebox.”

The Republican convention should be quite the event. Time to stock up on butter and popcorn, Fatwa.

Yup. Not only do I anticipate the convention itself will be a clusterfark; there will also be much vacuous protesting.

I expect that much of the ill-thought-out, overpriced landscaping, pedestrian bridge(s) and other multi-million dollar “improvements” to the Public Square area of Cleveland will be damaged.

But hey…lots of overtime for public employees -- especially cops -- and very profitable work for “connected” construction companies and their goonyun employees.

The choice of Cleveland for the GOP convention seems utterly irrational to me. (But then, so does letting Trump carry his charade this far.)

I see at least some in the MSM are starting to talk about the inevitability of Trump’s nomination. I also see polls that show Trump losing to Hillary, but both Cruz and Rubio beating her. Is there a connection between the two? Perhaps. Of course, IMHO, the last thing the MSM wants to see is a Cruz nomination, followed by a Dem. loss.

I think Trump’s carrying it this far and bound to go further because the proles finally got handed a candidate that clearly says FU to the GOPe.

This is a message to the Lindsays, McCains, and all the other “next-in-line” schmucks no one wants. It’s the SMoD aimed right at their overinflated heads.

I don’t know what State’s gonna look like, but I sure as hell ain’t looking into that abyss.

And yeah, I’m glad I live in BFE and can grow my own food and distill my own water too. o_0

Am I ranting overmuch?

Not at all. Perhaps even less than is warranted.

Am I ranting overmuch?

And OMFGZombieWolverines, are we gonna need that popcorn.

My friend from the County Tea Party who’s now County Republican Chairman as of last night, has taken heart the idea of changing the party from the inside.
G-d bless her -- she’ll give it everything she’s got.

But this is how the machine overruns the nails that stick up too far (like the ones who say, “Enough about the social issues, already, Jeebus!”): 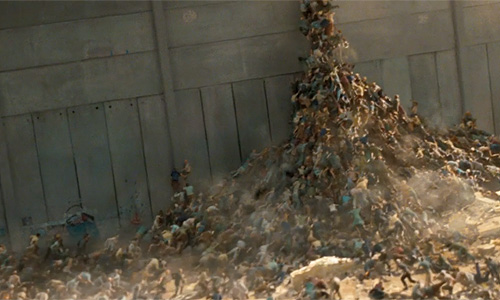 That’s what happens if you so much as squeak dissent during the platform discussions leading UP TO the convention. Aside from getting thrown out of the room -- with prejudice.

I’ll do my bit at the County level, thankyouverymuch. For however much longer I can stand it.

And then there’s my poor buddy Bob. Unemployed, a democrat, loves Bernie’s talk of free everything, and the idea of Hillary’s! inevitability. Hard to say who it’s going to turn out more poorly for.

But I’m sick of living in interesting times. Can I just have a coupla weeks under an umbrella on powdery white sand with briny salt air pervading my lungs? Good Atlantic seafood, cold drinks and good conversation and sweet fuckall to everything else.

I think after we get this release out the door, I’m making THAT happen.

/yeah, the pic is from “World War Z”. Amazingly, the movie had *0* to do with the book, but was actually pretty good.

I like the idea of free everything, especially popcorn.