The mystery shooting of teh Silverlake Coyote is an outrage, I tells ya! How dare some prole eliminate a predator without the approval of a vast cadre of yoonyunized bureaucrats and “specialists”?

Some damned scab undermining the carefully designed byzantine system for keeping Los Angeles from descending into Somalia-like anarchy is totally unacceptable in a civilized society.

And in Cleveland / RNC convention news:

Just read that a planned march to be led by anti-semitic tax scofflaw, race-baiter and Pez dispenser Al Sharpton the night before the convention has been cancelled due to recent events in Dallas.

Weirdly, this event was going to be sponsored by the AIDS Healthcare Foundation. According to spokeshole Tracy Jones, the (alleged) purpose of the event was to provide a forum for “advocates to publicly call on Republicans on the day before the opening of the RNC to articulate clear domestic and global policies on HIV/AIDS, income inequality and other critical social-justice issues.”

Happy Sunday: thoughts and prayers to those that need ’em.

Sad, Fatwa, that the Rev. Al had to cancel. I know everybody in the whole wide world was looking forward to that.

And if I may, let me direct everyone’s attention here:

Hai and thanks for teh reminder, Sven!

And Happy Wheeliversary to all o’ youse.

It’s been a, I don’t know how to describe it, worrisome is maybe the best adjective, month or so.

My oldest friend, an extremely competent component and compliance engineer has been out of work now for 10 months. In addition to the economy not all that good in SoCal, he’s hampered by his lack of a college degree. Thirty-five years of experience, but no degree, so not qualified. Not working is taking a toll on his health and attitude.

Another friend was just let go by Kubota as they move to Texas. He’s 62 years old, needs to work, but that age thing is a problem. This is the first time he hasn’t been working in more than twenty years.

My cousin from PA called last week; she’s just diagnosed with liver cancer. Another friend out here, only 45 years old, married with two kids, contacted me last week also that he’s been diagnosed with stage 3 throat cancer and is starting radiation and chemo.

On top of that, my brother has been by three times to discuss his estate and will. He says nothing is wrong, but I have wonder.

This all weighs on me. I’m helping as I can, but no matter what I do, it doesnt seem to be enough. I wish I could do more.

In addition to doing what you can, please don’t neglect to take care of Sven. (I know you understand that; just a reminder because “forest, trees”.)

Good thoughts just launched your way; wish I could do more.

Thanks, Fatwa. It’s just a frustrating time for what seems everyone out here. Luckily, me and Mrs Sven are still standing!

And we’ve had a kitty friend the last couple of nights. He’s a lost kitty, well-groomed and with a flea collar on, but we can’t find anyone locally here that’s lost a cat. Kind of a whiner, but arent all cats?

On another note, I have a gay friend that is anti-gun, liberal in all things, but a decent enough guy. What is he doing this weekend? He’s going to a local shooting range to fire a gun for the first time in his life. He said that after Orlando, he’s coming around to the idea of self-protection and wants to at least explore the idea of having a personal firearm. Sven -- ditto what Fatwa said. You can’t do everything, but doing something, even just lending an ear and a shoulder, are much better than nothing.

Here’s a t-shirt for your friend: 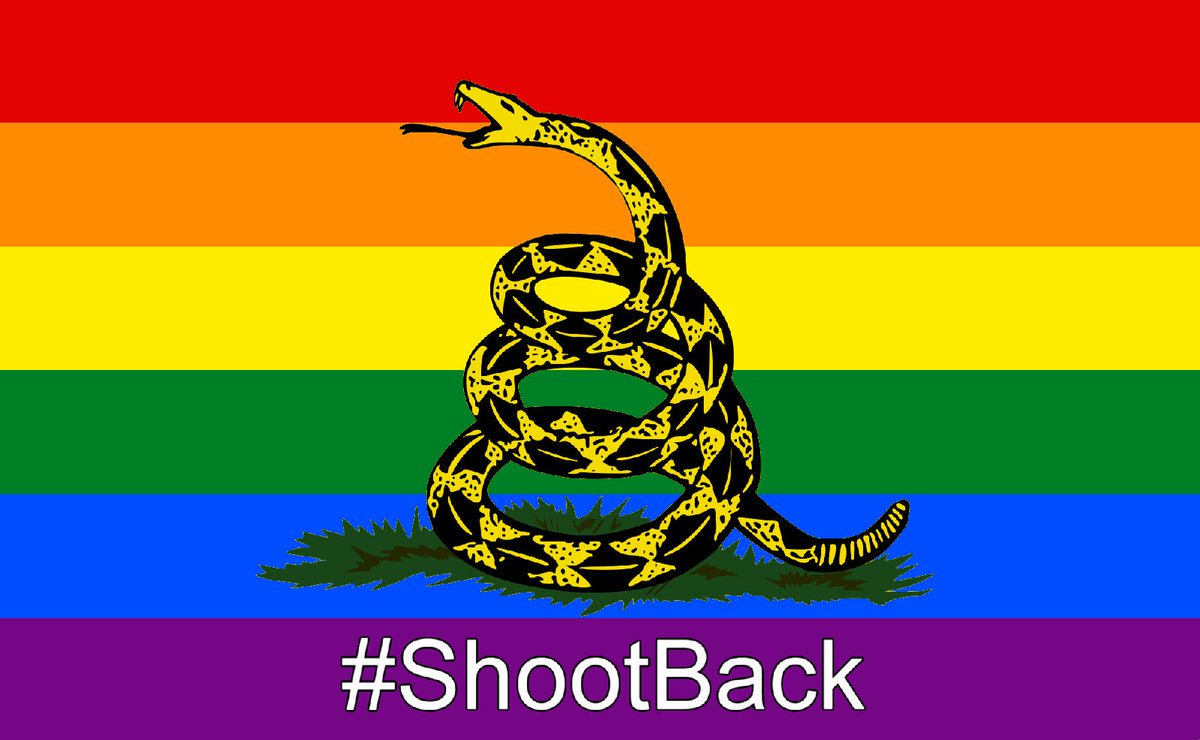 They are both powerful symbols that may well resonate amongst them folks.

Sven, that is a terrible load. As our good friends said, please be mindful of your own needs and well being. I am sure you are doing much more good than you think. I know this from personal experience that your council and friendship is of great value, regardless of actual help possible. I hope that deep down you really know this. You are a treasure in your friends’ lives.

I do have to give Obama credit. He has done more for gun sales than the NRA this last 8 years.

And I have turned this guy on to Pink Pistols. I’m curious to talk to him tomorrow and see how his experience went. I did steer him towards a friendly range down by the Van Nuys airport and told him to tell them that the was a first time shooter--they’ll be more than happy to spend time with him.

Hi Mac and thank you. Hope you are feeling better today. It is, I guess, that time of life. I was the youngest son of the youngest son so all my cousins are at least 10 years older than me, so it’s not unexpected to hear about their health problems.

My buddy from Kubota lost his wife two years ago and had been in a tailspin ever since, but he’s stopped drinking the last month and at least for now is handling things OK. My oldest friend though, I worry about him and the younger feller with the cancer--sheesh, this is a man that has done everything right. Hard worker, wonderful family, clear headed. It will be absolutely terrible if he doesnt beat this.

The really whiny lost kitty came by for breakfast this morning. Ravenous, so I guess he didnt make it home last night. It’s a male and Ive named him Jack Tatum, but of course he refuses to respond to his name cuz:cat.

He’s really in great shape and friendly enough so I don’t understand why no one is looking for him. Judging from his condition, I can’t believe he’s from somewhere far off.

“I’ll never say that there’s anyone out there in the NFL that’s trying to kill someone, but if there was somebody, that would be Jack Tatum.”

A question for the Minneapolis protesters: After 12 cops are shot in Dallas, do you really think it’s a good idea to throw firecrackers and other explosives at cops?

If they’re trying to provoke more shootings by the police, it’s a swell idea.

Simply being arrested would probably be okay, too.

Because victims of “institutional racism”.

Why the hell are authorities all over the damned country again letting the little BLM shits block freeways instead of arresting them en masse??

Because the desired outcome is not stopping people from disrupting the comings and goings of the proles, it’s sowing dissent, establishing a cause of fear, then promoting a “solution” that results in fewer rights and freedoms for some, and more power for others.

At least that’s what I would think if I were cynical.