Color me surprised that the media is still mostly embargoing the antics of PLS across the nation; if I didn’t know how impartial and unbiased they are, I’d suspect they were covering for the lefty goons. 👿

Here in Gwinnett Cty., someone allegedly left a Muslim school teacher a note advising her that her headscarf is no longer allowed and that she ought to wear it around her neck instead:

Because I’m a Bad Gerbil, I’m more than a little skeptical. We shall see…

And from a major publication in the nation which started two world wars: 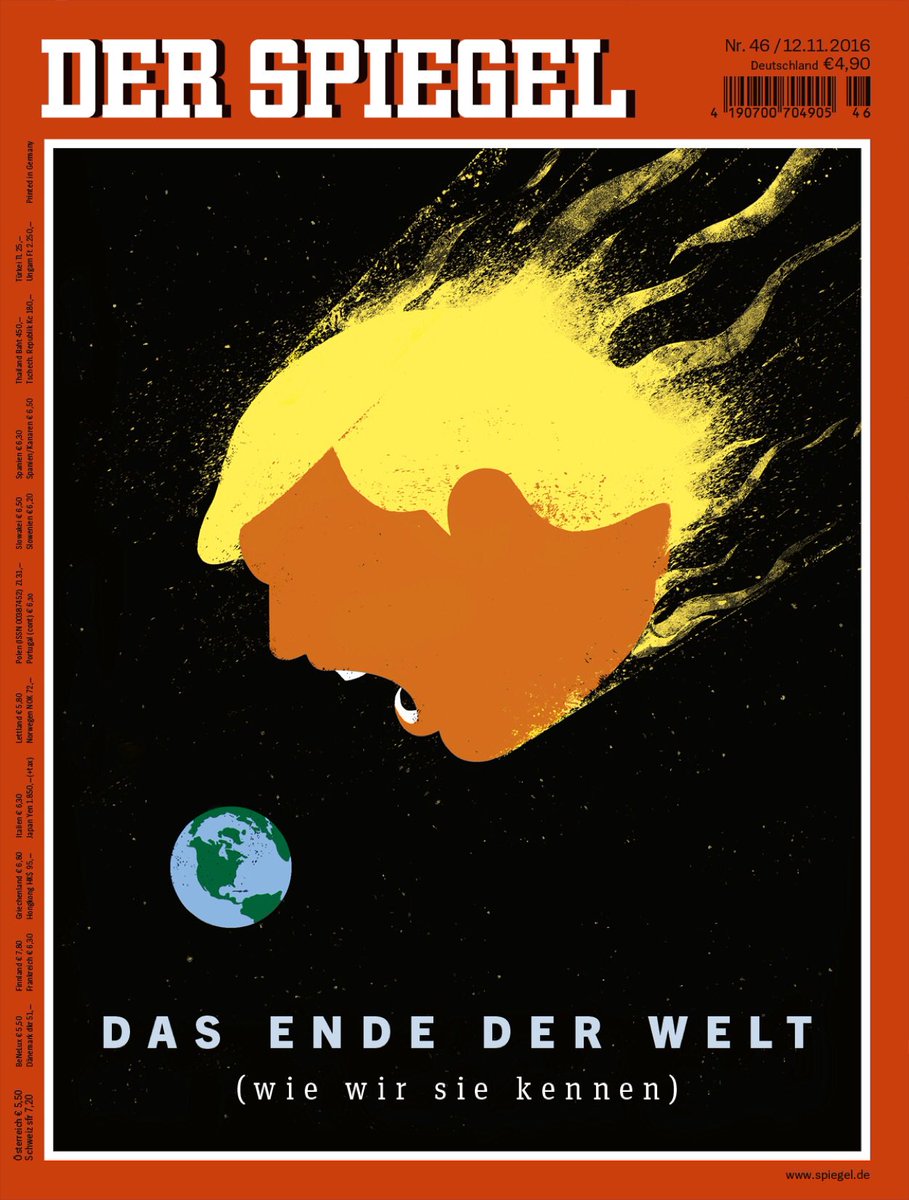 In re the Der Spiegel cover -- if you consider the parenthetical part (as we know it), then they may be right. In fact, I rather hope that this is the end of the current “world” of the MSM and their influence.

Ah. National Pizza Day. I get it!

Sadly, I don’t think the current crop of MSM-Leftie news outlets is going away any time soon. They will continue to beat the “racism” drum for all it’s worth.

I’m now to the point in this new world order, that I no longer care what PLSs and other special snowflakes care about. No desire to engage or even mock. My response going forward will be “So?” and “Huh, that’s too bad.”

I certainly share Paddy’s hope; unfortunately, that will still leave us with a FedGov which is a demonstrably criminal enterprise. One which Congress clearly will not do a goddamn thing about except have hearings and let Trey Gowdy bump his gums for some soundbites so the marks think those rapscallions are actually doing something.

It’s day 1283 of the IRS scandal; that’s over 3.5 years. Lois Lerner’s still enjoying her six figure pension which we pay for. Koskinen still has his job. Danny Werfel is still a free man. And there are Tea Party groups which still have not received a decision.

Cops all over the country are bring told to stand-down from doing anything substantive about the PLS.

Election polls brought to you by Science: the same people who gave us Global Warming.

Poll denier!
Why do you hate Gaia?

‘Cause Gaia just pisses me off. I mean, it’s not like she’s done anything for me lately.

“I had no idea that ‘love trumps hate’ involved so much arson and assault.” Love that one. It’s right up there with:
1. The job of the media is to cover the important stories of the day. With a pillow. Until they stop moving.
2. I’ll start taking global warming seriously when you start acting like it’s serious.
3. The best thing about the Obama years is all the racial healing.

The Earth First idjits video reminded me of an old news article (from 2002!) involving them which I “annotated”; my comments are between the double asterisks.

A young man taking part in an Earth First protest near Mount Madonna County Park died Tuesday night after falling about 100 feet from a redwood tree where he had been living.

The man, who remained unidentified as of late Wednesday, is the first tree-sitter in California to die after tumbling from a tree.

We’re pretty much in shock and trying to decide what to do,” said Tim Ward, a member of the Santa Cruz contingent of Earth First.

** I’d recommend burying the cadaver before it attracts predators and scavengers. On second thought, let the worms, maggots and other woodland creatures (with whom you’re so enamored) feast, ya tree-huggin’ gorp-monkey. **

Ward said the man was in his mid-20s and had recently come to Santa Cruz. He was homeless, Ward said, before deciding to join a tree-sit protest against Redwood Empire, the San Jose-based firm now logging the approximately 50-acre site.

We’ve been trying to find out what caused him to fall,” Ward said.

He said Earth First protesters are all trained how to climb safely and how to rappel and how to stay fed and sanitary.” They’re also told to stay on a tether while in the trees, but for some reason the man was untethered, Ward said.

** Hmmmm…they need training in order to stay fed and sanitary…and they’re kept on tethers. Eureka! There’s the problem, Timmy — your mewling, drooling inductees clearly are *not* adult humans. Apparently your recruiting *and* training programs need to be revamped a teensy bit. **

Redwood Empire on Wednesday issued a statement saying that employees were saddened by the news. The company said a logging crew and foresters rushed to the scene of the accident shortly before nightfall Tuesday. The crew had heard the man moaning and went to investigate.

** One can only imagine them gleefully chortling as they did so. (Much like “Muttley” in the old “Dick Dastardly” cartoons. Stop that pigeon, stop that pigeon…) **

Crew members and foresters comforted the man, who told his rescuers he didn’t know why he had fallen, before emergency medical crews arrived. He was transported by ambulance, then transferred to a helicopter and flown to Santa Clara Valley Medical Center.

** What a waste of tax dollars that could otherwise have been used to save a spotted owl or a couple of snail darters. **

Hospital spokesman Matt Schenone said the man’s heart stopped when he was being transported in the helicopter. Doctors tried to re-start his heart when he arrived at the hospital shortly before 10 p.m., but he was pronounced dead minutes later.

His body was sent to the coroner’s office, where medical examiners on Wednesday night were trying to determine the exact cause of death as well as the man’s identity.

Earth First Santa Cruz had brought plywood platforms, buckets, ropes, food, water and other supplies to set up the protest in mid-August as logging crews prepared to move in. From 15 to 20 activists took turns occupying four trees — named Esperanza, Free, Critter and Fresco — as loggers worked around the protesters.

** At least we know the names of the four murder suspects; clearly *one* of them is guilty of failure to hug Mr. D’oh! back. **

The scene of the accident was in the same area where the group had set up the first tree-sitting protest in Santa Cruz County’s history in June 2000.

The area has been the subject of a long-running dispute. Environmentalists and county officials contend the state Department of Forestry and Fire Protection is too lenient with loggers. They argue that the logging of redwoods and Douglas fir will defile a creek that runs through the property and will upset the balance of the habitat. Redwood Empire and department officials, however, say the logging is environmentally sound.

** As an aside, why is it that virtually *all* of the huge forest fires in the western YouEss take place on Federally-managed land? They hardly *ever* occur in privately-held forests. What an odd coincidence. The next time you hear someone bitching about “logging roads”, try replacing the word “logging” with “fire”. **

On the eve of the first anniversary of its aerial village” near Mount Madonna, Earth First’s attempt to establish a large tree-sitting operation near Boulder Creek was marred by the serious injury of a young woman. Jenna Griffith, then 20, who uses the forest name Sparrow,” was injured when she fell about 30 feet from a tree and hit her head on a redwood stump. She is now fully recovered.

** Perhaps “Sparrow” should change her forest name to “Gooney” or “Dodo”. (If the latter, she could also be in charge of organizing Caucus-races. Prizes! Prizes!). I’m thinking of taking a forest name myself, such as “Rock”, “Grizzly” or “Cliff”. How about “Woody”? (Uh huh huh huh.) **

This tragic accident should not have happened,” Redwood Empire’s statement said of Tuesday night’s accident. The man and others were illegally trespassing upon private property for which there is a state-approved harvest for second-growth trees.”

** If the authorities had done *their* job and arrested the trespassers, Mr. D’oh! would likely still be alive to harass passers-by for money as well as entertain them by urinating and defecating on the streets of downtown Santa Cruz. **

Redwood Empire officials have said they were surprised by the protest because the minor concerns” expressed during public hearings had been addressed by the company.

More surprising is the apparent lack of training and disregard for safety considerations by these tree-sitters and their supporters, which would result in an untethered person falling from a tree,” the statement said.

** I think Redwood Empire should file criminal and civil charges against Earth First on behalf of the D’oh! family. **

The first Earth First tree-sitter killed in California during a tree-sit protest was in September 1998 in Humboldt County, where David Gypsy” Chain was killed by a tree felled by a logger.

In April, a tree-sitter in the Mount Hood National Forest in Oregon fell from a tree and later died.

** Am I the only one thinking of Nelson Muntz (from “The Simpsons”) right about now? **