It’s Friday, Friday
Gotta get down on Friday! 👿

(I may be a Bad Gerbil, but not quite bad enough to embed that video.)

And a very Happy Anniversary to BW and RabBeet!!!

(Artist’s conception of Teh Rabbit Hutch.)

We have a local criminal genius:

A regular customer allegedly stopped by a Lawrenceville-area convenience store to rob an employee at gunpoint on Nov. 3, police said Thursday.

Quaris Holland, 29, of Auburn is wanted for armed robbery for the incident at an Exxon gas station in unincorporated Lawrenceville that occurred at about 4:30 a.m., according to Gwinnett police.

Don’t they cover this sort of thing in Common Core?

Good news, Fatwa!
Jews are still number one (but still get no respect).

I thought this one was more appropriate (from the MSM to you). 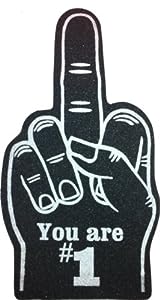 If it’s true that Trump’s going to appoint Sen. Jeff Sessions as AG, I am officially done giving PEOTUS a chance.

Jefferson Beauregard Sessions is one of the bigger defenders of civil asset forfeiture in our government. AFAIC, anyone who is a fan of the government taking people’s stuff without a shred of due process has no place as dogcatcher much less as the U.S. Attorney General.

It appears that Trump has, indeed, offered the gig to Sessions.

Whether or not it is accepted, PEOTUS can go and jam himself; he no longer has my provisional support.

I guess you expected more of him than I did. I expected he would be rather establishment. He has never been a conservative but I think he will be better than Hillary and at least understand business better. I can’t say I have been real happy with what I have seen so far but I am not really disappointed. I will try to reserve judgement until he is actually in office and see what he does and how he handles Congress and the bureaucratic machine.

I am happy people took even a baby step away from the anointed establishment pick and the move to greater Republican majorities in the legislature, Governors, and State legislatures, is a decent message that people wanted change and were not just enamored with Trump himself. If they don’t blow it as they did under Bush then maybe people will go farther down that road. It may depend on if they believe what they see or what the media tells them. They seem to be a bit more skeptical.

Imagine if Reagan had been given a Republican House and Senate.

Well, we all knew that Trump 1) wasn’t a Conservative, and 2) had no firm set of values, and 3) he’s better than Hillary!. Right now, he is pissing off a lot of the right people regardless of what he does and it’s quite fun watching the Left sob and moan and shudder.

How is he going to work out? No one knows. It’s more likely that the Republicans in Congress will screw up worse than him given their track record.