At first glance, thought today’s thread pic was a flour-dredged kitteh in a wok.

I wonder if CA’s Magic High Speed Train To Nowhere was designed from the git-go to be a massive taxpayer ripoff. Occam’s razor and all…

Good morning and happy…Saturday, GN! Hi, Fatwa -- the rain hasn’t hit us yet -- should be soon though.

When I first met Mrs Sven, it was at a defense contractor in Chatsworth. The company made ruggedized printers for the military. As was/is typical of military contractors, everything was many months to a few years behind schedule. One of the projects that Mrs Sven was assigned to was a Navy job that was like two years late on delivery.

One of her first meetings was with the project manager and two Navy commanders. The PM went into his usual song and dance about design issues, late vendors, quality problems, etc.. The Navy representatives sat through it for about 15 minutes and then one of them rose up and calmly said “You know what the problem is? We’ve lost our sense of outrage.” And with that they both walked out.

That was back in 1988. The phrase about losing one’s sense of outrage has become more common since then, but that was the first time I’d heard it. That phrase though sums up the whole bullet train fiasco and why it’s not a bigger scandal than it is. We’ve come to expect failure.

Great version of the song Fatwa is humming today. Ron Young has a great rock voice.

Definitely a different version of “I Wish It Would Rain” from The Temptations’; I enjoyed that.

“We’ve lost our sense of outrage.”

True; I try to pick-up a little of the slack. 👿

Too bad there are rarely significant consequences for gummint failure; that’s a big reason why our country’s farked. People forget that any organization is made-up of individuals and usually won’t ferret out the folks who are actually responsible for failure.

Back when I worked for Hughes Aircraft, we’d have to contribute to a contract proposal. We’d determine the number of new process documents that would have to be created, number of vendor support hours, ongoing process support, failure analysis, etc. and submit our cost analysis to the program office. The PM would look at our numbers and cut them in half. The rationale was that we couldn’t win the contract with realistic costs, so we’d low-ball it, then make up for it with the inevitable change orders (which we’d charge out the wazoo for). Meanwhile, the heads of procurement all seemed to be driving really nice cars.

This little piece o’ carp gets more punchable with every passing day:

#InOurLifetime I hope to see the end of mass shootings, saving of our environment, Net neutrality, the reversal of citizens united and the saving of our future but none of of that will happen, unless you VOTE. #voteforthefuture

Somebody has been feeding him his daily dose of pravda.

What about income inequality, racism, and the elimination of plastic straws?

If those things are eliminated, what will the Democrats run on?

Ooooh -- #armabandsforchange (it has a peace sign on it).

Love the way the armband accentuates what a bony little shitweasel he is.

Somebody has been feeding him his daily dose of pravda.

(Google has apparently deleted the unflattering image; will see if I can find it elsewhere.)

Not the deleted image I’m looking for, but amusing:

Let’s see if this works: 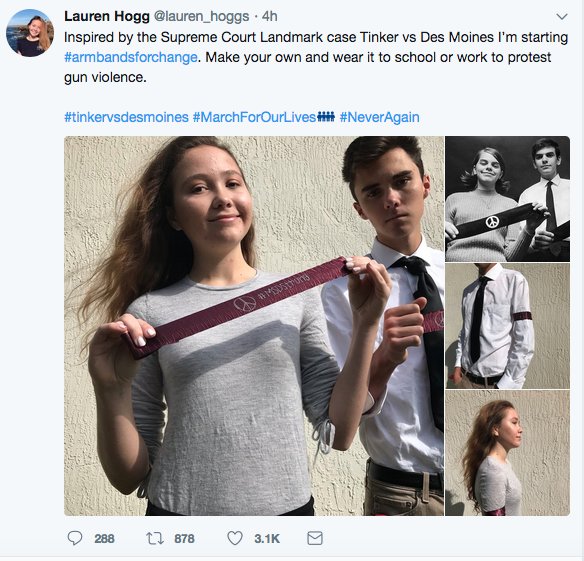 She has apparently deleted this tweet, but someone saved it.

The center image on the right is young Hogg; the armband shows what skinny little arms he has; hee!

And for Sven, an article about Spain’s La Abuela Rockera:

Thanks. Good for Grandma.

Here’s another one you’ll love, Fatwa:

You were correct, sir.

Here’s a larger version of the pipestem arms pic:

You might have a little trouble getting Jewish Americans to embrace this look. Do you have some shiny jackboots and brown shirts to go with it? Guessing maybe you skipped history class while you were shilling for the @DNC… pic.twitter.com/WfA4jL9y65

She issued an “I’m so sorry if I offended anyone” apology and James Woods was very gracious in his response.

I’m amused with the latest entry in the Takin’ Down Trump contest: Stormy Daniels. Do I care? No. After almost 18 months of daily portions of Trump has finally crossed the line-Trump is DONE-Trump is killing ALL of us-Trump is a madman-ETC, I find myself not caring a whit anymore about what he tweets, f*cks, eats, or says.

I did sign up today for the March 24 MARCH FOR OUR LIVES!!! Hoggapolooza in Ventura County. May go to the Santa Clarita one. Have to see if anyone else is interested.

The rain today has been a steady drizzle. Annoying. Do it or don’t do it.

Hope you can find some evil companions to go with you.