Hahahahahaha! Good one, Mac! I can hear the music cue in my head.

Around 4:30 a.m., Gwinnett police received reports that the suspect, later identified as 36-year-old Lawrenceville resident Derrick Hall, had barricaded himself inside a restroom with a knife at the Sugarloaf Parkway McDonald’s after being asked to leave the restaurant.

The 911 caller told dispatch that they believed Hall was doing drugs and that when he was asked to leave, he fled into the men’s restroom.

For nearly four hours, Pihera said, SWAT team members, negotiators and the Gwinnett County Fire Department worked to coax Hall out of the bathroom, with negotiators “actively trying to communicate” with him, though “he never responded coherently.”

“At times, the suspect would open the restroom door and swing his knife at the officers,” Pihera said, “(and) while the suspect was inside the restroom, he caused significant damage. To my knowledge, he pulled the urinal off the wall leading to a broken water pipe.”

Pihera said at around 8:15 a.m., the SWAT Team deployed gas inside the McDonald’s and “shortly after the gas deployment, the suspect was taken into custody without incident.”

Thankfully no one died.

Happy Wednesday, GN and good morning, Fatwa! I see the fresh hell on this morning’s menu is the collapse of the stock market with a side of the end of civilization. Damn that Trump and the NRA too!

Gornography? I wonder if Kurt Eichenwald is in to that, too?

Thankfully no one died.

But McDonalds lost a perfectly good urinal; bet they were, ah, pissed about that. 👿

Gornography? I wonder if Kurt Eichenwald is in to that, too?

Apparently, he made himself somewhat even more toxic on Twitter yesterday. (Missed that as I had zero time for the folderol of social media.) 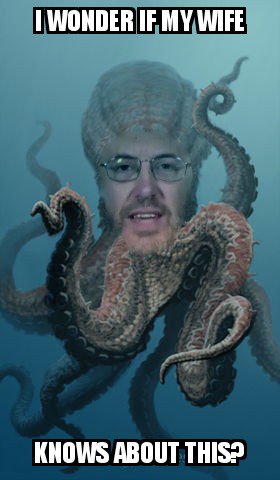 So, Gandalf has a rather rare type of cancer and there is not much in the scientific literature regarding effectiveness of treatment or long-term prognosis after treatment. The biopsy showed some infiltration of the cancer cells into the blood vessels, meaning it will travel to the lungs and/or lymph nodes. Mitochondrial activity ratings show that it is very active. Without treatment he may last 1-6 months, or maybe longer. Aggressive chemotherapy might work, but would be hard on his already weakened kidneys and would cost about $2800, on top of the $2200 we’ve already spent. Then again, it might not work. Less aggressive chemo would cost less for drugs, but more for monitoring and may or may not work. From what I’ve read in the scientific literature, even with treatment the prognosis beyond one year is not good. We’ve decided on palliative care, as needed, to keep him comfortable, and happy.

I am very sorry, Paddy. I think that is the right course. As much as I love the furry ones I think we have an obligation not to be selfish and put them through something like that. He has been blessed to have the life you have given him. Now is the time to make him as comfortable as possible and make the call when you can’t. My respects.