In fact, over a 30 day period, it is possible that not a single f*ck was given.

For Heaven’s sake, whatever you do, don’t divide by zero f*cks!!1!

Pardon my cynicism, but I expect as soon as Trump signs the stimulus POS, we’ll learn that suddenly the number of new Chinese Lung AIDS cases is diminishing sharply, moar people are magically recovering, lockdowns will be lifted and we can rapidly get back to “normal”.

Yeah…I’m that sneeringly distrustful of the filth who rule us.

The Chinese government and media will face no significant consequences. Inflation and/or a “recession” will eat away at our assets (which is good for the gummint) even if the market makes a strong comeback.

And our masters will have learned that we can be panicked into surrendering far more of our rights in one fell swoop than they ever dreamed possible. Government help here, to the rescue! Now why did I picture Fatwa when I saw this?

Hope you, Elena and the extended family are all doing well.

I was thinking more of your opinion of government “help”.

I was doubtful about the 2007/2008 bailout but thought I might be wrong. I quickly regretted that, I should have known better. This time I am very cynical about it. Any possible good intentions by some will be quickly subverted, perverted, and twisted by the usual suspects. I think the resources they are looting would have been far better used to end this sooner and get us back to work. This is how you get an extended Obama recession with many bad things entrenched in government and impossible to dislodge..

I’m sure that once things settle down, govt at all levels will establish commissions to review what went right and what didn’t with their findings published in 3-5 years.

Regardless of the reality of this situation, govt and media have too much invested in it for it to be anything other than the WORSE THING EVER.

I’m now fully on a day schedule, until Tuesday, that is. It’s fine though.

On Wednesday, I had a sore throat, or was it Tuesday? It didn’t hurt that much, so that’s why I didn’t mention it--it kept going out of context for me. But I was thinking, here and there, well, maybe this is the virus. Still it wasn’t any different from the sort of thing I get from sleeping in the wrong position or something like that--sleep related anyway.

It never got any worse, and today it’s gone. actually, I believe it might have been gone by last night. So, it probably was the sleeping thing, maybe. Or some little bug.

If it was THE virus that would be a very mild case, then. But I’d be afraid Harper would get it much worse. My friend who got it, never had symptoms at all. But he was tested along with a number of other people who were exposed at a conference--which I mistakenly thought was in LA but which was actually in Nevada.

I am glad yours cleared up. I had flu like symptoms last week, very rare for me so I thought maybe bad allergies, the air was bad around here. It did make me isolate more just in case, but it has receded so I think it was just allergy related.

I have never had a flu shot in my life and I tend to get flu maybe once a decade, maybe less. It is frustrating to Elena who gets a shot every year, and usually the flu as well, but her exposure has always been much worse than mine, and I have had some obsessions about hand washing and avoiding touching my face for a long time.

Yesterday I went to the market to buy coffee filters for our new Mr. Coffee -- the police were already there arresting a shopper that flipped out and was throwing stuff off the shelves and ramming other shoppers with his cart. Things are getting weirder out here.

Puns. On the thread pic?

Did somebody say Alpaca lips? 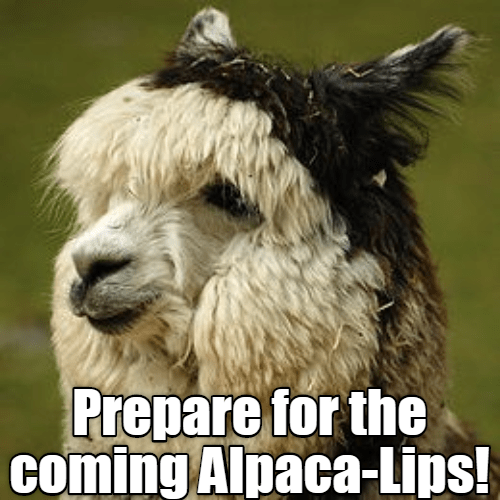 Noticed yesterday that several stores have placed “social distancing” marks on the floors near the check-out lanes.

Reminded me of junior high school gym class where we had to line-up on numbers for attendance. (Hope that Messrs. Jackson and Moll are rotting in Hades; they were quite unkind to gawky, bespectacled kids with not-so-good hand-eye coordination.) With the entire govt apparently focused on the Chinese flu and the medical delivery system, I hope that there’s more than a few smart people still keeping an eye on terrorist and fringe groups like antifa. No better time than right now for an attack or a disruption to the infrastructure.

dv8 -- I’m glad you’re feeling better and hope that Harper is, as well.

Fatwa and Mac -- history shows that nothing halts the growth of government, except a complete reset.

Here’s a Joe Cuba “boogaloo” classic from the ’60s with an apropos title:

I just read somewhere on gov.uk that covid-19 has been downgraded.

Here’s the link. Seems to be legit:

Mac, according to my PCP, this has been the worst two years for allergy sufferers than she can remember, and she’s a victim herself. I was hoping and hoping we’d get a hard freeze to kill everything, but no! ‘Tings are always blooming it seems. I’m glad you’re feeling better, and you too DV8.

I have absolutely no idea where the hell my day went. A chore here, a chore there, a little lunch, a little nap and then up to the fire station to bag some ice in the now Biohazard Level 4 ice shack.
I wouldn’t be surprised if next week there’s a full-on Racal suit with a helmet and on-board air. At this micro-community level it’s insane.

The local online discussion about whether a formal order needs declared has so many people wailing that they need to be told “what to do”, it’s impressive and really scary.

I still can’t take the national caterwauling. It hurts my ears and the parsing hurts my head. I want to believe common sense will break out.
Because, “don’t let a good crisis go to waste” is getting really fvcking old.

I guess I should rustle up something to eat before PopTarts start sounding like a good plan. 🙂

according to my PCP

You talk with your phencyclidine? And it talks back? Ooookay.

I want to believe common sense will break out.

I guess I should rustle up something to eat before PopTarts start sounding like a good plan.

Maybe add a slice of fried SPAM for protein. And some Velveeta.

I actually tried SPAM on a bet not too long ago, if you can believe it (no restrictions on how to cook it either).
I already had a secret ingredient.

One of our neighbors competes at the Houston Rodeo BBQ Cookoff every year.
He gave me a VAT of brisket fat.

It certainly eased up the intro to SPAM and the dogs were very happy.