About to make a food run to Walmart. Will be interesting.

Hi, Mac; hope your Walmart run is as successful as mine yesterday. (I scored almost everything on our list).

Gosharooties…I’d sure like to think we’re poised to turn the corner re the WuHuFluScrewjob, but I’m not naturally inclined toward optimism. That said, seeing some massive civil disobedience this week pleases me; it’s a start.

This sad episode has revealed the amount of human filth in elected and appointed office across this country. Despite my decades-long attitude of skepticism and loathing re government, I am well and truly appalled at the extent of the rot.

And even moreso by the number of Quisling-Americans in our midst.

Happy Birfday 2/seven to Sven; celebrate like a Viking!!1!

I hear the immigrant song when I look at that cake.

Are we sure it’s a cake and not a hat? ‘Cuz it almost looks like a hat.

Har! Yes it does.

With a feather, it could be a Viking pimp hat.

How multi-culti is that?

The gentleman you’re describing was on “Master Distiller” the other night. Making rum.

Oooh! I caught a couple of episodes of that by accident. I’m going to have to go looking for it.

I made it back. The stock looked much better than I have seen it for over a month. They even had paper goods, and a selection. They limited to one of each item but I did not get any as I am doing fine online and left the store stock for others. The only thing that still had bare shelves was disinfecting wipes and sprays. I did find spray bottles of Great Value spray and bought two, Elena was happy. Got all the food items I had on my list and even got some more.

I even found alcohol swabs, and cheap. That really surprised me. I picked up 200. Theirs are not my favorite but they work fine and they are the only ones I see that are not ten to twenty times the price. We should be good for some time now.

Excellent; glad the shelves were better-stocked for you today.

FWIW, I’ve generally found Great Value and Equate products to be quite satisfactory for the price. (Some are pretty amazing price-performers, like the GV frozen breakfast croissants and biscuits. They’re less than $0.80 / sammich locally; we don’t eat a lot of ’em, but they’re nice to have in the house.)

Agreed, we regularly use many Great Value products, and not always because of prices.

Happy Friday, GN! Glad both of you have made successful shopping runs despite THE PANDEMIC TO END ALL PANDEMICS.

Glad this week is finally over, but not looking forward to what next week is going to bring.

Funny, I know this song. Heard it so many times. Never knew its name or what it was about.

Mac -- I’m glad your WalMart run was successful. Maybe the supply chain has caught up to the hoarding foolishness.

Teh Younger went with Teh Older this morning to collect data on Teh Older’s research project. The plots are located in a state park, which is open, but the parking lots are closed, so Mrs. Paddy is dropping them off. At least we think the park is open. They have to hike back a few miles from the road, so hopefully they won’t be hassled.

After yesterday’s fiasco, I tried a new baker. I think I need to keep looking. 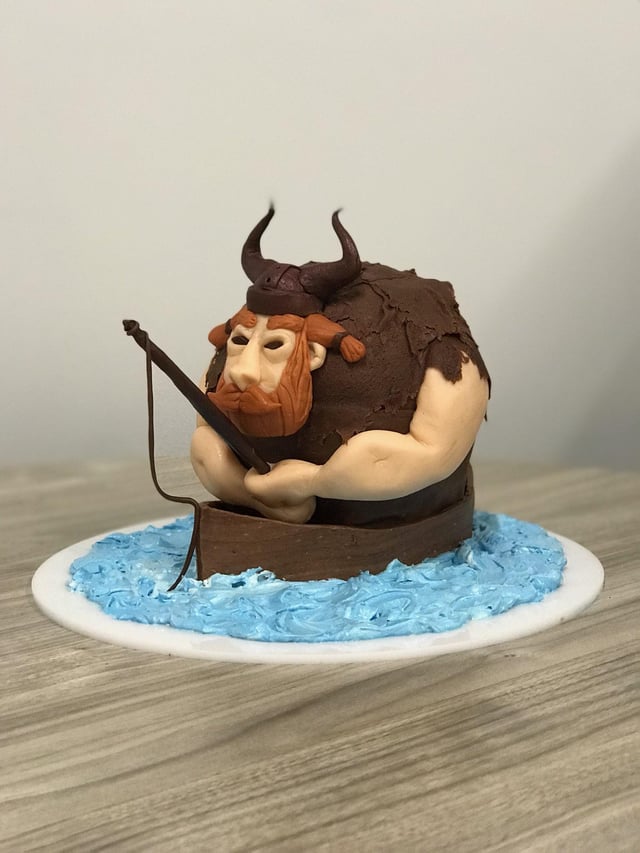 All-in-all, that’s a marked improvement over the previous baker’s work.

Hope Teh Younger and Teh Older won’t get hassled by any LEOs.

Criminy, what a stoopit age we live in.

That looks like a Tauran going fishing in World of Warcraft.

Happy Birfday week, Sven! This is me, late to the game this afternoon. Just catching up on today’s thread and leaving a few comments.

Didn’t make a grocery run today. Did that a few days ago. Just to top up a few things.

I made a special trip to work in the late morning today. I was running out of mail supplies so I went to work and got the big van and made a post office run.

These supplies make it possible for me to do my nightly mailings early, which means I don’t have to do the hellish split shift. And can get it all done in one go. A full(ish) night shift instead of a 4 now 4 later, type of thing.

I Got 4 big stacks of Mail tubs. And 1 1/2 bags of mail bags. Now they can sit until next week, by which time they will hopefully be corona free.

I do my best handling them, Washing hands, disinfecting, etc. Changing my clothes when I get home,

Lots more laundry is being done these days. I hear bleach is hard to get, but I’ve been managing to get it. Still it wouldn’t kill anyone not to bleach the whites for a while.

My old around the house socks are permanently blackened anyway--no amount of bleaching can fix that.

Now having recovered from my 1 hour postal trip, I was reading today’s thread to Harper. She was enjoying the flow of things. She’s waving hi to everyone. We’re parked on the couch and I’m using the living room computer on the TV to read and post, watch videos, etc.

Aw, the kitteh looks like one I had: Doof (yes, short for Doofus -- he really was one).

After the neighborhood walk this morning, I participated in a conference call with the EEOC for the Accidental Texan© as he pursues his age discrimination case against our former employer. He’s got ’em dead to rights … and is hoping there’s a large cash bonus at the end of this trail. I don’t think there is. I just wish that the the gal running the conference call had gotten the info about his bonuses and pay rate before they called me, though.

I’m a line animal/cube rat/pixel chimp/whatever. I don’t *want* to work that hard and give up that much.
For me, it’s just one of those details better left unknown (especially since the company line for the last TEN years at review time was that no Managers or higher were getting bonuses).
To plagiarize Plague-y, “rasser frasser…”

Since getting sworn in is rare and tends overclock my head, I made a midday Wal-Mart run. So far I haven’t run into any lines, it sure looks like it’s getting back to somewhat normal. I don’t recognize a lot of the employees, they may be doing like HEB, busing in good ones.

I can’t tell is if it’s just me, the people I’m shopping with or it’s a general thing: I’m getting tired of the home kitchen version of “Chopped”. I got lucky with Bush’s Fiesta beans, but even those are gone now. At least there’s more “canned meat” to keep the Vienna Sausages company, and were oddly enough an ingredient on an episode of “Chopped” I saw just the other day -- the judges were horrified. Hee!

Since I wasn’t up for cooking tonight, the ‘za is in the oven and it’s time to make salad.

BIAB if the dogs’ll let me.

Hi X, Strangely, I used to do a lot more cooking before the quarantine. Now, all I seem to want to do is make comfort food, (augmented with protein of various kinds.

Last night, I made some pasta from scratch. The new (whey rather than soy) protein will require some adjustment. Mostly I did this because I had defrosted some dough a couple of weeks ago, and didn’t want it to go bad. (It was vacuum sealed and frozen for a while so that does make it last longer in the fridge) home made kansui is supposed to make it stretchier, but doesn’t have much effect on this new protein.

The general rule is: Wheat Protein makes things hold together more, most other forms of protein makes them fall apart more. So a balance is necessary. Next time I make pasta, I’ll try 1 flour, 1/3 whey 2/3 wheat instead of 1, 1/2, 1/2 like with my soy mixture. If that comes out too elastic, I can bracket it from there. We’ll see how it goes.

Hey, LA_TeX!
I remember when I worked for Hughes Aircraft and learned of all the bonuses available to managers -- while top performance for everyone else netted 2-3%. Given what I knew of a number of managers, I was not happy. I was also not willing to spend my time and money joining the after-work golf events that seemed a prerequisite for joining such “lofty” realms.