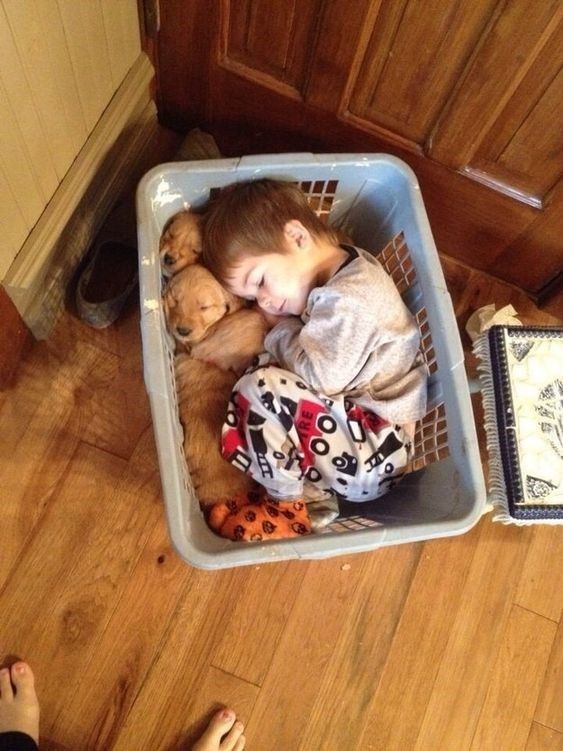 One o’ them puppehs looks a little odd…

Cheers for your capsule review of Larry Elder’s doc; hope it opens a few eyes.

Bummer re the brewery; kind of amazing that the owners (presumably) invested a lot of money, time and effort in starting-up without having a marketing plan sorted. (Not to mention how difficult it must be to open that type of business in the first place…especially in CA.)

Did that thread pic come the White House web site? Thinking that it might be Harris’s suggestion for improving the conditions at the border re: unaccompanied minors.

I think Harris’ suggestion only called for one puppy per child.

A blessed Sabbath, Gerbil Nation!
Good morning, Fatwa! and Sven! (who came in while I was typing)

In re the brewery: they lasted 12 years, which means they made it past the difficult start-up years, but when asked about social media, the owners responded that they wanted their beer to speak for itself. ::facepalm::

I spent a lot of time, yesterday, sanding 3/4 x 3/4 by 10 1/2 inch pieces of wood for the wine rack. Sand four flat faces, knock the edge off four edges, knock the edge off eight ends. Next. It takes about 12 minutes to get 20 done, then I’ll let the sander cool off for 20. 100 sanded, only 100 more to go. Made good progress on the template and jig and laid out all the locations of the rungs on the verticals. Maybe I can do some assembly today. Either that or moar sanding.

Good morning, Paddy. You still got your work cut out for you wit the wine rack, but what a nice change of pace from sitting in front of a computer all day.

The contractor that did several home jobs for us, a staunch and rather vulgar Conservative that we became friends with, called over the weekend to let us know, quite drunkenly and happily, that he and his wife were leaving this “shithole loser state” and moving to Bullhead City in AZ. A funny phone call and happy for them.

Hey, Mac -- are you still on your own or has Elena made it back?

She just got back about 1/2 hour ago, thanks.

Glad to hear -- hope things are working out for her sister.

I used to be a Sunday morning news show junkie, but now I only occasionally watch parts of Howard Kurtz’s Media Buzz on Fox and generally only when Mollie Hemingway is on. In their first segment this morning, Kurtz, Hemingway, and Leslie Marshall were discussing the Chauvin verdict. Part of that conversation was whether there was jury intimidation. Marshall said no, and made this statement:

“And I want to talk about the jury very quickly. I live in Los Angeles and we had riots here and the jury knew that was a possibility when they acquitted those police officers in the trial with Rodney King. And they knew that. They didn’t make a decision based in fear. You have to give jurors more credit.”

What bullshit to dismiss this out of hand. First off, there weren’t any riots prior to the verdict in that trial. Second, in the King trial, it was moved out of Los Angeles to Simi Valley in Ventura County and the jurors were from Ventura County, not Los Angeles. Change of venue was denied in the Chauvin case. After the verdict, Los Angeles burned for days, but Ventura County didn’t.

You can argue that Chauvin was guilty, but you can’t dismiss the idea that mob violence played no part in the outcome. Will there ever be evidence of that? No. I expect every juror, once they start granting interviews – and they will – will deny that as a factor. Does that mean it wasn’t? No.

Also, doxxing wasn’t a thing during the Rodney King trial, but certainly is now.

Some jurors already admitted it WAS a factor.

Editor
Paddy O'Furnijur, Village Souse
Reply to  dv8 - something whimsical but not grim

Hope you and Harper are doing well.