I always enjoy reading the comments on guns-thanks, guys.

Got some yard work done yesterday-this morning is church, grocery shopping, and other odds and ends around the house.

Other than that, I got nuthin’

Not quite sure what to make of this headline at AoS:

Gerbils: ABC Edits Juror B29 to Say She Thinks Zimmerman Got Away With Murder… But She Didn’t

It was the ‘gerbil’ part of the headline that caught my attention….

Other than that, I got nuthin’. Kawfee not working this morning; maybe it’s defective.

Well, you know the Alphabet Networks, what do they care about truthiness?

Mac,
I’m sorry to hear about your MiL. On the other hand, for someone who’s set the standard you spoke of -- I can imagine she can’t abide being helpless. I’m sure her daughter’s feel exactly that right now.
{{{{BIG hugs}}}} for both you and Elena. And prayers for the whole family.

Oy, what a week. Had a friend come into town from CA looking for property out here. Poor girl’s eyes were spinning by Thursday night -- and don’t Mr. X and I know THAT particular sense of overload. PLUS, trying to keep straight what you saw, where you saw it. what its good points were and bad points…

She took Mr. X with her the second day -- hell, he’s better than the city inspector -- and they came back exhausted.

She didn’t find anything “right” this time around, and both she and her husband be back the first week of September for a week -- I think that’ll yield better results.
::fingers crossed::
They want out, so very badly.

My days were just pedal-to-the-metal trying to get ready for production week. This week is just going to be even harder and faster.
::sigh::

Now…about guns. I’m gonna say DON’T BUY a Taurus. The Taurus PT140 I’m currently carrying (because it’s small and can fit in my purse), but if y’all will recall, we had to send that one back after the first 30 rounds because the mags kept falling out.

Mr. X bought a Taurus snub-nosed .38 special revolver the week before last, and we tried it out this past Friday after finally finding ammo that wasn’t hollow point.

It’s currently boxed and wrapped for shipment back to Taurus because it misfires. Could be the ammo, could be a too short firing pin, whatever, but shooting it double-action, it’d fail on some rounds. Go to single action and it’d fire the same round that already had a firing pin mark on it.
Me no likey.

BUT, I was actually kinda surprised at how well I did from 20′ with it (groupings a little larger than a softball).

IF I were to buy another handgun, not only am I going to stay within the eight freakin’ calibers we currently own, I think I’d stay with Sig, Glock, or some other well-regarded manufacturer.

While Taurus has a little less “love it or hate it” than the Glock, Taurus has left a bad taste in a lot of people’s mouths including mine.
The PT140 has been flawless since we got it back, and that’s why it’s in my purse, but…

And…we’re off to look at a couple of properties for my friends. But before I go, coffee anyone? 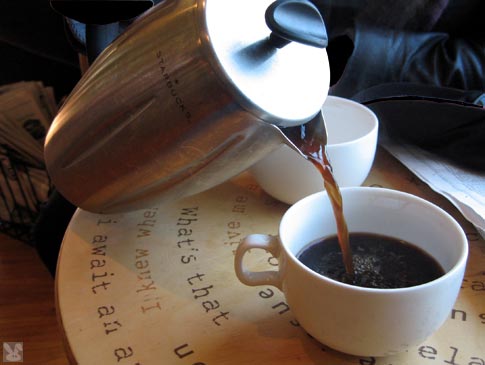 A blessed Sabbath, Gerbil Nation!
Good morning, TeX, Sven, and Fatwa!
Thanks for the coffee, TeX!
I concur re Taurus. A friend bought a Taurus 1911 clone at the same time I bought my Springfield 1911 and had just enough problems with it that he could never trust it.

The S&W 438 has been “unavailable” per their website and the few I’ve seen for sale new or used have been a bit pricy. (I’m guessing that the current lack of availability is due to S&W being backordered up teh wazoo.)

While my two Taurus autos have been reliable they were clones of good designs, the Sig and Beretta. Even so the Beretta clone came from the factory with a broken firing pen. The newer Taurus designs are engineered to be cheap to produce and the people I know who sell them in gun stores say far too many have to go back. I would not buy another one and I only keep the ones I have because they would bring very little and have been reliable so far. I would not either as my primary arm, they just don’t show the quality of the better guns.

As to the revolvers, in the 1990s I bought three new Taurus revolvers. They seemed well fitted and finished outside. As I worked with them one developed a catch in the double action pull. I opened it up and found the poorly finished and sharp internal parts were digging into the soft parts they rubbed against.. I repaired the damage and retimed the action. I had seen the same in some of the early S&W stainless Model 66 revolvers and repaired those for friends. The parts were just not as well finished and smooth as with the blued parts. The difference was that the S&W parts could be smoothed and deburred and would be fine, but the Taurus parts were poorly engineered, they were flimsy, rough, and soft. I could smooth them but they would never be something I would want to bet my life on. I opened up the other two revolvers and found the same thing. I sold them back to the store as used guns and took the loss, though they were unfired. I will never consider another Taurus revolver. I do not recommend counting on it as anything but a toy.

I feel the same about Charter Arms revolvers after working on the actions, they are engineered for cheap production, not reliability and durability. The difference with Colt and S&W parts is dramatic. S&W has cheapened up it’s parts in the newer designs but they are still superior. Double action revolvers depend on several small but critical parts to work in tightly timed coordination to function properly. Those parts must be strong, hard, tough, and smooth, to work and last. These don’t go well with fast and cheap production. Rugers are probably the best example of using modern production methods to reduce costs for well engineered and quality parts. The cheapest revolver I would consider for serious duty would be the SP 101 in .357 Magnum or one of the bigger Rugers. I prefer the S&Ws and will pick a good used one over a new S&W or any other make but I would trust a Ruger once it was well tested and proven. The parts are robust and well made.

That Taurus revolver will never be something I would rely on.

My favorite revolver, and the gun I would keep if I could have only one, would be my older Mod 19 S&W with NP and 4″ barrel. If concealment was top priority I would pick one of my shorter barreled K frames, the Mod 19 with round butt and 2 1/2″ barrel or the Mod 65 with 3″ barrel. With the round butts they would hide better but still offer the advantages of a K frame .357 Magnum.

I still see some police trade in Mod 64 revolvers at the big internet outfits at times. I would prefer one of theses to a new Taurus revolver any day, by far.

Appreciate the above info. (And the nod to Scorpio / Dirty Harry.)

Fatwa, if you are also looking at used ones the 638 is the same gun but without the black finish. I carried mine daily for ten years plus. It is a good choice for concealment, light and easy to hide and carry, but effective with good ammo. My main complaint initially was that the gray sights were hard to see in poor light but a set of Lasergrips solved that and were good grips as well. This is mine, with the Lasergrips.

Thanks Mac; I’d prefer the 438 from a cosmetic standpoint but recall you’ve previously mentioned how pleased you were with the 638. At this point, I’d settle for either…or the Ruger LCR .38.

Next time I go to Trader Joe’s, I will be very close to a gun shop JtB recommended to me a couple of years ago and will stop-in there. Given John’s recommendation, I suspect their customer service is significantly better than the shop closest to me. (Which at least has cheap range time; I’m gonna need it, as I’m planning on putting 1K rounds though whatever revolver I purchase just to “get comfy”. Probably in 50 round increments, as -- based on firing the Ruger -- that’s all I think I could handle in one session.)

And while I’ll probably wait a bit to acquire a laser grip (both due to economics as well as a desire to become more proficient with just the sights), you, Best Man and a couple of other folks have convinced me that a laser on a small frame revolver is not as silly as I’d originally thought.

(I also appreciate that Best Man is a jazz pianist who’s shared some specific hints re avoiding potential injuries in that regard. He generally carries a S&W 340PD with Crimson Trace grips, which I love but can’t justify the expenditure. Plus, I think the slight extra mass of a 438 or 638 would benefit me.)

Agree on that last. The 15 oz aluminum frame revolvers are nasty enough with serious ammo. I don’t like the Scandium frames at all. I have also seen too much on cracking issues. The 432 is light enough to carry very comfortably in an IWB holster. It’s easy to forget it’s there. losing another 2 or 3 ounces is not worth the problems.

I know many people who are very happy with the Ruger LCR. I like the accessible hammer on the 438/638 but would be fine with the Ruger if that was what I had. The Lasers are pricy but they are very effective. They are also a great training aid. I had Elena set up with a set on a Mod 36 (steel frame) with snap caps so she could practice her double action pull while watching her TV. It shows if you are pulling off the target better than anything short of live fire. It is worth it for that use alone. When she can hold that dot on target while pulling the trigger through she will be able to defend herself with it, though range time is still needed. In many ways though this practice is more beneficial than range time until the basics are mastered. I use them for practice this way as well and it is particularly effective when you have shot enough to know the need for a tight and proper grip. Exercising the muscles and mastering the trigger pull make a big difference when I do get to the range.

I am painfully aware that -- to quote Harper quoting Heinlein -- “I am but an egg”.

While I’d like to have the single/double action option afforded by the S&Ws, that’s not a deal-breaker viz. the Ruger.

If you got ten minutes or so….

I saw excerpts of that the other day. It looks like square miles of ruins.