I’m way beyond disgusted with the fed govt and have moved further into the land of apathy which sits right next door to the province of mockery.

Plenty of room here in teh Principality of FY, TW.™ (Sure, our founder’s an arsehole, but he’s a fair-minded arsehole. And he’ll mostly leave you alone as he, too, prefers to be mostly left alone. Also, cookies.) 😉

The National Park Service director told Congress on Wednesday that he had to shut down the open-air memorials on the Mall during the government shutdown because of terrorism, saying that closing them was the only way to protect them “in a post-9/11 world.”

Director Jonathan B. Jarvis also said his agency had received intelligence showing an increased threat of danger since the shutdown began — though he would not tell two House committees what those warnings were.

What a steaming load of frisch.

Mr. Issa said the monuments on the Mall remained open during the 1995-1996 shutdowns, and wanted to know why Mr. Jarvis acted differently this time.

The director said the threat of terrorism makes things different.

“We’ve always been at war with Eurasia Eastasia wrong-thinking citizens.”

Mr. Jarvis acknowledged he ran his closure plans by the White House, though he couldn’t remember who he spoke with. He said the decisions were his, not the White House’s.

If you’re gonna fall on your own sword, kindly have the common decency to use a real one, you POS.

Fatwa -- I’m sure the NPS director is very sorry “if you were offended” by the closures. He might even acknowledge (if enough pressure is applied) that “mistakes were made”, but if they were, I’m sure he’d counsel us all to “move forward” and not dwell in the past. After all, at this point “what difference does it really make”?

If it were up to me, I’d slather Mr. Jarvis in peanut butter, dress him in Lady Gaga’s meat suit and chain him to a tree at Yellowstone. 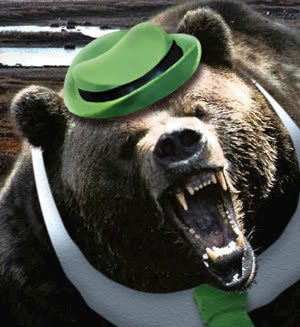 Oops…I did it again; dadblame it! GREETINGS AND A WARM WELCOME TO OUR FOUNDING LEADER —

Come on in and make yourself ta’ home. We’ve missed you so.

Ooooh, ooooh, I bet Sinner is here for the Friday night captioning contest. Poor guy, he doesn’t know that I have already won it!

I’ve been pondering the awful, terrible and disgusting Washington REDSKINS name, ’cause it’s all in teh news. I think I’ve found the perfect compromise that will please all those poor, poor far-left-tards.

The Washington BUREAUCRATS -- players “who work by fixed routine without exercising intelligent judgment.” I think that’s about it.

I hate to disagree with you Jerrie, but the perfect name for the Washington Redskins would be the “Washington Obamas”. What better way to honor this transformational man, the cleanest, smartest, most articulate man to ever occupy the office, to celebrate this tremendous moment in American history, than by linking his name with America’s first president?

My captions for tonite’s contest: “Because f8ck you, that’s why” along with “They always sag like that”.

An hey Sinner, hope all is well.

GREETINGS AND A WARM WELCOME TO OUR FOUNDING LEADER —

El Presidente -- teh yay!!11eleventy! A laurel…and hearty handshake to ya!

…hey Sinner, hope all is well.

Oh…my losing captions for this evening:

2) “Maaaaaaan…that’s even worse than biting the testicles off of sheep.”