Love the thread pic--very apt as to when Mrs Sven is cooking!

Heh…I hope to avoid the keening lamentations of the smoke detector today.

Yes…it’s Thanksgiving Eve Day Morning. Since an additional side dish (besides Squash of teh Godz™) was requested yesterday, I’m about to get started on the Creamed Spinach of the Low-Level Disciples™ in order to clear the kitchen for squash production laterz.

Off to teh scullery; BBL.

Due to poorly-packaged frozen chopped spinach, part of the counter looks like Popeye went apesh¡t in our kitchen.

Imagine my delight; thanks, Kroger!

Greetings
Drive-by on my way to a morning nap.

Had a couple of victories against worthless grandson yesterday.

I took TM to the base for shopping & on the way over there, I convinced her to go to the back & change her pin number on her check card. This will stop him from ordering up more video games from Sony. I also convinced her that I needed to keep the card , since she always ends up giving it to him to run to the store for her. See, we had the other card, but the last time we changed the pin, the bank sent another card to her house. She called & wanted the pin number. I told herthe number & said that he would use it without her knowing, but she brushed me off. That was when he lied to her & said the number didn’t work, got cash out of her & then charged up all those video games & all that other stuff. The fact that he took the card without her knowledge & used it the very next day after the last episode convinced her, I think. I wanted BW to get the card back last week, but she didn’t want to ruin the birthday dinner. Weird family dynamics.

Also, when I was there, I got her latest bill from Direct TV. I wanted to know why it jumped over $70 in one month. A quick glance & it turns out, she was being charged for a premium movie channel. She asked Zombie Sis about it & ZS said “I thought it was free.” Well, that can happen. You get a free trial period & if you don’t cancel, they just keep it on your account, So we can’t really blame that on him. I told TM that I would take the bill home & have BW cancel the channel.

After we got back from the base, WG & Zombie Sis came out to unload groceries. TM stayed in the truck, because we now had to go to Kroger to get the ‘.59 a lb.’ turkey. Because of course, 3 drivers & 2 cars can’t take her a mile to her neighborhood grocery store. But on the other hand, when I take her to the store, I don’t get her to buy my groceries or get money out of her like the others do.

So I finally get home & start going over her cable bill. Oh! Oh! 2 pay per view movies at $6.99 & a UFC fight that cost $54!. Money is no object to WG as long as it is someone else’s. I called TM & told her what I found, She doesn’t really understand how you can just order up stuff over the tv. But she was plenty mad about it didn’t give him permission. She wanted to get it “taken off her bill” & I told her that it didn’t work that way. She was more mad that she had to pay for it than she was that he stole from her again. I am beyond disgusted with them.

When BW got home, she called Directtv & tried to get it fixed. They said she would have to have TM on the phone. They told her she could do all that online. I told her to call back & get a different operator & just say she was TM if asked. In the meantime, she did go & set up an account for TM. The online will let you add & buy, but if you want to cancel something, it is back to the phone. Ha!

BW called back, got a different operator & pretended to be TM. She got the movie channel turned off AND she got the PPV feature password protected. Ha! No more fights & movies for WG!

So we have a reprieve until he pulls something else. Last week he got TM to sign a check that he would go cash at the bank to get her some money. But of course, she thought it was a $200 check. He filled it out for $250 & kept the $50. I told her to fill in the amount and sign it, but she won’t. Can’t fix stupid, but I keep tryin’.

Creamed Spinach of the Low-Level Disciples™

Criminy…you and BW put up with an awful lot of carp from teh Addams Family; I commend you both for trying to protect TM’s assets. Without taking a tire iron (H/T -- Bilge) to any of ’em. Yet.

Maaaaaan…I’m amazed that anyone pays that kind of money for a televised sports event! (OTOH, many of them would probably think I’m weird for spending an equivalent amount on 8 used hardback books at teh Amazon Marketplace.)

Heh! That never gets old. 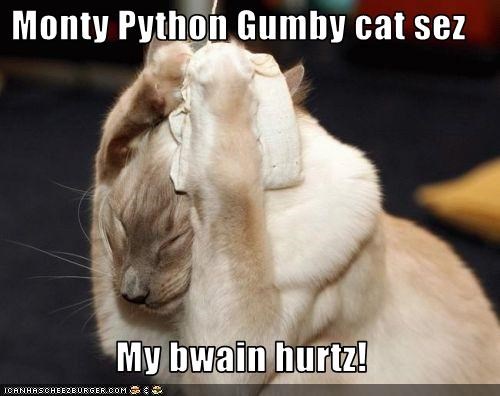 Enjoyed the story, Rabbit, but my laughter was tinged with some guilt. What worthless people they are, but God bless the two of you for making the best of it and doing the right thing.

Well we were allowed out early today from work, altho it was of the super secret don’t tell anyone kind of getting to leave early. My cynical side says that mgmt at our level had the OK to do so, but they were trying to make it appear that they were going out on a limb for their employees. My pragmatic side says whatever; you are out of there and can commence cooking. My sunny side says why so cynical-- just smile and be happy!

The burners are burning away madly and the oven is ovening along. Trying cranberries for the first time based on a recipe at AoS. Then I got lentils cooking for a cold lentil salad that my Mom use to make and a big pot of water going for a pasta dish.

Left a voice mail for Mrs Sven; she stayed home in the morning to clean the house and I called to let her know I was home early and how nice the house looked. Her system will transcribe the voice mail and send her an email with a text of the message when she doesnt pick up:

There you come home for the come with us three we are aware of this right away.

This is William officially — but also scored was so nice job you do with it could grow large your also stop supermarkets I picked up some cranberries I’m gonna try to hash them — also but this semester aluminum coral springs Storage Containers and bags — OK let me know how open reported was I gonna say lunch and then I will start scratching my own sack so.

I can be out your way talk to you later bye.

Good evening, all! Happy pre-Thanksgiving — the SotG is about done, the kids will be here tomorrow and then we’ll all be off to have dinner at the family compound.

No, really; all of us. In my Crown Vic. There will be sharp elbows involved.

**Rabbit, you and BW are clearly saints.**

Sven -- did the people who coded the healthcare.gov site write the code for Mrs. Sven’s voicemail transcription program?

My cooking is done and who knew? Cranberries are easy peasy and quite tasty too!

Off to scratch my sack.

Another song that reminds me of Obama. Aerosmith. Round ‘n Round:

Could almost be a leftie’s lament.

A heartfelt “Gobble-tov!” to TeX, Fatwa, and all others as we light the first candle on the Thanksgivikkah menorah.