Cats--is there nothing they can’t do?

When I went searching for a “caturday wrongness” image, this was one of the first hits I got: 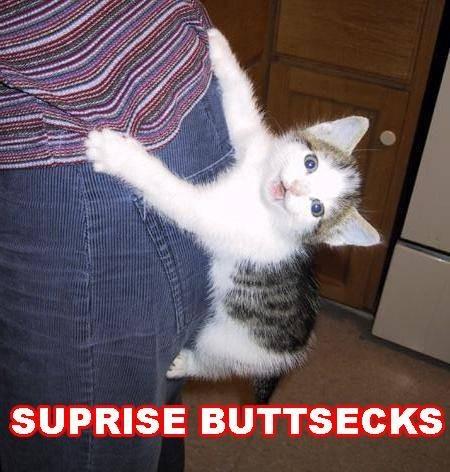 I’m appalled, appalled I tell you, at the degenerate filth available on the intertoobz! 😉

Har! One of our bobsledders got trapped in his bathroom and didn’t have his phone with him:

…With no phone to call for help, I used my bobsled push training to break out. #SochiJailBreak pic.twitter.com/apZRefgvCO

I keep hearing that there’s doorknob shortage in the Olympic Village--maybe that’s why--athletes keep locking themselves in.

Us Sven’s have to stick together:

I’m pretty much meh about the Olympics. Liked them better when they only happened every 4 years and when at least we sent amateurs to them.

And good morning, Fatwa! Or afternoon in your neck of the woods.

Happy Caturday, Gerbil Nation!
Good morning, Sven! Good afternoon, Fatwa!
We watched the opening ceremonies last night. I was really impressed by the projection system and parts of the ceremonies -- other parts, not so much.

Congrats to your fellow Sven!

I’ve not watched any of the Sochi coverage thus far…even online.

I largely agree with John Scalzi (an author whose science fiction novels I enjoy; his politics not so much) re the Olympics:

This is the point at which one swans about the need to reimagine the Olympic games, to get them back to their ideal of friendly competition between nations, blah blah blah insert Chariots of Fire soundtrack here, but, come on. It’s too late for that. The Olympic Games are what they are: a floating, rotating boondoggle-shaped shitcake of graft, venality and cronyism, with a spotty icing of athleticism spread thinly on the top to mask the taste of the shit as it goes down the gullet. Barring some sort of active revolution, that’s not going to change. Sochi’s problem is that this time, they heaped extra shit into the cake and skimped on the icing, and what icing it has is also made of shit. You can’t mask the taste. At this point it’s not worth it to try.

Sadly, I find myself quite agreeing with this perspective. From a celebration of the human endeavor, it’s become little more than a venue for corporate sponsorship and individual celebrity.

I quite agree with those sentiments as well. We haven’t watched any of the coverage either … probably because it’s on NBC, right? Yeah, we don’t have that channel programmed into our guide on DirecTV. Although I should see if I can find some of the curling events, those are fun.

Other than that, afternoon all y’all! And Happy Birfday III of Seven, Kaaaaaaaaate-y!