Being the mean-spirited cuss I am, I rather like the shoes in Mac’s thread pic.

In answer to your query of last night: No…not enough of my peeps will leave Team Blue for at least a couple of reasons:

1) Too many Joooos still have socialist sympathies (for reasons I’ve never been able to fathom).

True story: a couple of years before Mom died, she went to the funeral of a Joooish acquaintance from the civil rights era. She was amused that there was still some rancor between those with Leninist or Stalinist leanings and the Trotskyites.

2) If they leave the Dems, where are they going to go? It’s not like there’s all that much difference between the Republicans and Democrats at this point in practical terms.

Additionally, the GOP suffers -- rightly or wrongly -- from the taint of being a home for some religious groups which traditionally have not been very nice to Jews in America. (I don’t mean that to be offensive to anyone here; simply stating an “insider” opinion.)

Hiya, Fatwa. I never figured why teh Jooos weren’t full-on libertarians. They outta be.

As for those religious groups I blame those damn dirty Presbyterians -- or the Unitarians.

I sure do hope y’all have a great day, ’cause you just know I will.

Ol’ Jerry is headed to Mithithippi this evening. I’m scheduled to visit some oil wells in Alabama also. This trip was cancelled from last week, ’cause global warmening.

We had some global warmening yesterday, in the form of hail. In fact, one of the nearby beaches got enough accumulation of hail that it looked like it had snowed. 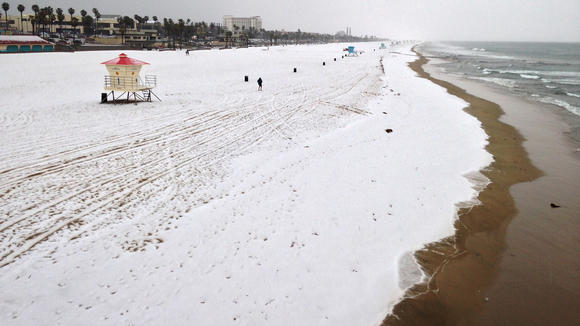 Jerry -- you sure do get around a lot!

Safe travels; MS and AL ought to be warmer this week than the past few.

Heard about the hail on teh beach out there but hadn’t seen any pics; reminds me of the Great Lakes…minus the dead alewives lining the sand. 😉

It appears the Left is frothing at the mouth over Prime Minister Netanyahu’s speech.

I’m frothing a bit myself about Boehner caving in on amnesty.

So the American people voted Republicans into majorities in the House and Senate but Obama outvoted them single handed.

Remember, Republicans only barely control one-third of the government. You can’t really expect them to exercise that control to the extent that Democrats do, can you?

He won his first two positions by getting confidential records unsealed. I would bet money they have access to the “confidential” FBI files. It is so nice having law enforcement and security agencies as enforcement brownshirts for one political party. I guess he wants to show Putin how it’s done in Chicago.

Laws are for the little people.

We might not have our current panopticon and internal security apparatus if generations of Congress members from both parties had taken their oaths of office seriously and not let the federal government expand to a point where on the order of 98% of everything it does is unconstitutional.

Further, I wish their were iconic photos of that bastard Nixon behind a set of prison bars; that sort of thing might have also helped discourage the traitorous scum in D.C.

I learned that the young male who answers the phone doesn’t know my rep.’s positions on pertinent topics and is just a glorified receptionist. I asked for an oral or written response to the following questions:
1. Does Rep. Walters support Pres. Obama’s executive amnesty?
1.a. If not, how can she justify her ‘yea’ vote to fund DHS, given that defunding DHS would not affect their essential services?
2. Does Rep. Walters take seriously her oath of office, especially to support and defend the Constitution of the United States and bear true faith and allegiance to the same?
2.a. If yes, then does she believe that Pres. Obama’s executive amnesty is constitutional?
2.a.1 If she believes it is not, then how does she square her oath with her vote to fund those unconstitutional actions?

All I can say in re getting a response is, “good luck with that”.

You may get some platitudinous, non-responsive BS from your rep’s minions; I very much doubt you’ll get specific answers to your questions.

Yeah, I figure my chances of a pertinent response are somewhere between ‘none’ and ‘FYTW’.

The Park Police said no injuries were reported, and police had no information about who might have fired at the building in Fort Meade, Md.

Either they’re lying about having no leads, or they’re not very good at that whole spying thing.

Oh, and not connecting the dots on asshats like the Tsarnaev brothers or Mohammed Atta’s merry band of maniacs, even when they’re given fairly specific information.

It may be because their ‘needles’ are so small.

--“It may be because their ‘needles’ are so small.”