Did it REALLY keep you from throwing those snowballs??????

On one occasion, it actually did. As the eldest family hoodlum (although not always the instigator of hijinx), I was of the opinion pelting that particular neighbor’s siding had happened so frequently of late we might be on the verge of getting caught. (We were not the only local miscreants who had taken a dislike to the owner.)

My brother and cousin disagreed with my caution and were going to indulge without me. But since the folks had imbued me with a certain sense of responsibility by virtue of my relative age, I didn’t want my bro and cousin to get in trouble (and likely face Dad’s 50,000 watt glare plus whatever penalty he meted out). Thus, I did my best to distract them from their potentially unfortunate course of action.

Another exciting week at work coming up. I can hardly contain my excitement--it threatens to bubble out of my nose and other orifices.

Sven -- sorry about teh work suckage. I’m sure Hillary! feels your pain and will work hard to get you a better job.

While cruising the lake yesterday afternoon, we noticed several houses for sale. At least two were foreclosures. These are houses in the $2.85 -- $3.5 million range, mind you.

Last week, someone hacked an electronic billboard in the Buckhead section of ATL and posted the infamous Goatse pic.

Now, both the DHS and FBI are hunting down the perp.

The same DHS whose TSA recently failed a series of tests by their IG wherein they missed more than 2/3 of the fake weapons and bombs successfully smuggled past checkpoints.

The same FBI who weren’t able to provide Garland, TX authorities with timely info that a couple of jihadis were likely headed their way to murder people.

The “asshole” jokes pretty much write themselves.

(And then there’s the pawthetic assortment of hacks, scumbags and douchenozzles running for President; thus far, there’s not a single worthy among them.)

The Tree of Liberty is in dire need of refreshment.

Especially ironic given the recent stories about gay TSA inspectors working together to sideline attractive men for extra screening so they could grope their privates. And of course the stories of straight JBTs doing the same to young women are not new. The moral outrage seems the slightest bit insincere.

That said I do not want to see the billboard or whatever. EVER!

(Or anyone else, because even I have limits.)

That’s a quality I appreciate in you.

Hope that things are good in your corner of teh world.

Did Mac ask for a goat picture? 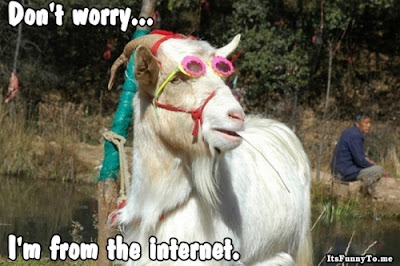 Because I’m a giver, here’s a photo of teh Goatse billboard hack.