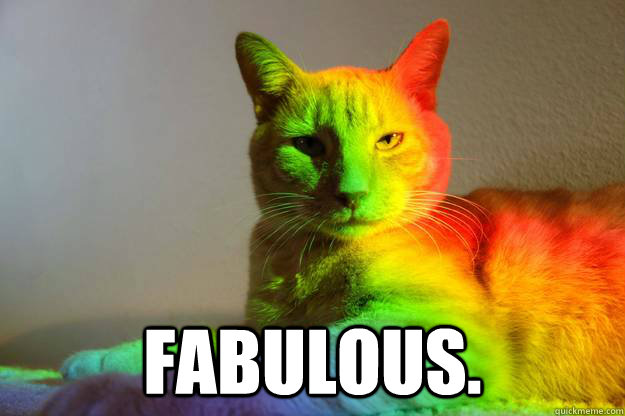 Perhaps I needed a little more makeup on the close-ups.

SackO’SugarK and I hope that the treatments are yielding optimal (or damned close to same) results.

That third pic ought to be titled “The Eye Of Jerry Is Upon You”.

As re makeup, it sorta depends on the look you’re going for. Evening Greetings.
I don’t know where the last few days have gone. Well, it has been cold & rainy. Many naps sang the siren song to me.
Thanksgiving was quiet. BW stuck to her decision to stay away from them and it was a painful one. She pretty much cried all day & napped. ZS called & left a message on when to come. BW didn’t call back. So an hour later Sis called. BW told her that she was going to stay home with me this year. No one tried to talk her out of it.
The next morning, Worthless Grandson called BW to tell her he needed $500 for an ankle bracelet or he would go back to jail. She told him she didn’t have it-that we have spent all our money on fixing up TMP. (not entirely true- we have money, but not for him) He then asked her to charge it! She said all our cards were maxed out. (also not entirely true). He then said “my Mother authorized it from the sale of the house”. BW said, “Well, the house hasn’t sold yet.” He told her that she was his last hope & again that he didn’t want to go back to jail. Yeah, this is from the guy that has laid on his Momma’s couch for the last month & won’t go to work. So BW started offering solutions, like go to his siblings, friends or ask his boss for a loan. He hung up on her.
Radio silence from all of them until last night. ZS finally called & the first words out of her mouth to BW was “I was thinking about Mom & my heart hurt & I needed to hear your voice”. Hogwash. Only after “just the sound of your voice has made me feel better”, did she start asking about what we did for Thanksgiving.
Later, I told BW that once again the phone call was about something she wanted from her (comfort), not to call to see how BW was doing. I thought the grief was phoney. BW said “too little, too late”. Then, after a couple of minutes, “Well, I gotta go, WG just made lasagna & it’s ready”.
Same ol’ same ol’. But at least BW is getting better as far as seeing them clearly. The old standby of saying “they’re sick people, but they’re family” is finally sounding as hollow to her as it has to me for a long time.
Yesterday was cold & cloudy, but we went to do the pool anyway. I raked a bunch of wet leaves. We got about half of it done. So we went back today & finished up. It was sunny & clear & in the low fifties. BW managed to smash a finger moving a heavy landscape rock. I didn’t realize until we got home how bad it was. Her finger is all bruised up. I’m hoping it is better in the morning. She refused to go to the doctor.

I was listening to the radio on the computer and half watching that idiot Shep. after the cops had the shootout & were approaching the car, I actually heard him say, ” We can see a person apparently SLEEPING in the backseat” BW & I laughed and laughed.

See ya in the morning.
(POO-f)