Tune-in later to “Battle Of Teh Ethnic Stereotypes” to watch Paddy and me arm wrestle over the last of the corned beef!

Bottom-of-the-Evening to you from why-is-it-so-bloody-hot SoCal! It was 93° yesterday.
Love the thread pic, Mac!
Good morning, Fatwa!
I promise I won’t put cheese on all the corned beef, this time.
Here, have a beer!

Happy St. Pat’s Day, GN! I am getting my Green on and ready for my annual Cabbage and Potato Facial!

…my annual Cabbage and Potato Facial!

I promise I won’t put cheese on all the corned beef, this time.

And I’ll save that beer for later; heh.

Good morning from shaky SoCal! Two good jolts a few minutes ago. Appears to have hit in the SFV.

4.8 in Encino. Big enough to wake people up but probably not big enough to do any real damage.

Nothing like a temblor to get your attention early in the morning; glad it was a fairly mild one…and that you’re on solid rock.

Off to work--Happy St. Paddy’s Day!

Il Douchey will probably cave on this: EU wants to ban European names for American-made cheeses.

If I were in-charge of rebranding in the U.S., I’m pretty sure I could discourage this idiocy really quickly:

Happy Birthday, Darling David! This next bit is something just for YOU — you should note that ‘Brenda’ is pronounced ‘Amy’, in Welsh (it’s a vowel thing).

(Which, in Welsh, is “Llanfairpwllgwyngyllgogerychwyrndrobwll-llantysiliogogogoch”.)

You really shouldn’t have. No, really.

Well, since it is Fatwa’s birfday AND there was a temblor in SoCal, I figured I’d kill two birds with an Earthquake Cake to mark the occasion! 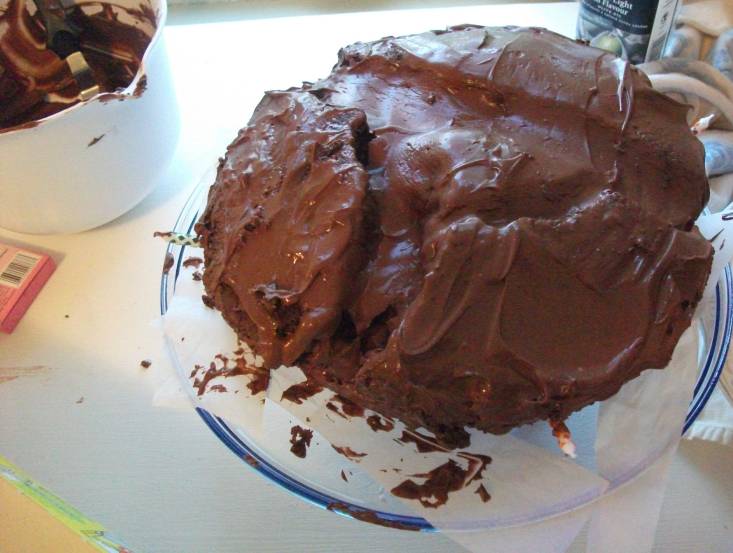 We’re still riding the Texas Winter Weather rollercoaster out here: 50° one day, 80° the next. Those unfamiliar with Texas weather are bitching they can’t wait for Spring to get here (not fully understanding it lasts ~3 weeks), and G-d only knows the bitching that’ll start after 60 days of 95°+.
Oy.

Who knew earthquakes came in chocolate??!?!?

It’s rainy and 39F here at present but will allegedly hit 70 by Friday; not holding my breath.

Fatwa, that made me laugh! I would go in there just to salute the creativity.

And give ’em a thumbs-up for taunting yoonyun tools. (A value I support wholeheartedly.)

Hell…i might even look at a used Outback if they had any in stock. (My SiL has an ’03 Outback she purchased new and loves; still looks and drives great.)

What tickles me most is it would only work because the union goons were too lazy to man their picket and just left the sign.

The MOSTEST HAPPIEST BIRTHDAY TO FATWA…and many, many more!

And in honor of our dear Fatwa, a letter Jerry sent this morning.

Even though your note is stated as a demand rather than a negotiation and with all the savoir-faire of a Prussian autocrat, I will consider it a negotiation. Point by point:

I have referred this matter to (company Jerry represents) outside counsel.

Happy Birthday, Fatwa!
It’s probably a good thing BrendaAmyK did not hire teh Welshman to perform live. It’s a bit chilly for just a thong today.

Thanks for teh well-wishes.

There appears to be one goonion member in a red hoodie; wish I could see the expressions on the holders of the dealer’s sign’s faces. 😉

It’s a bit chilly for just a thong today.

My trip to Walmart this afternoon says otherwise. 😉

Got this one right pic.twitter.com/t2VUHTP7Xk

In honor of the day I’m having some Black Bushmills. Cheers.